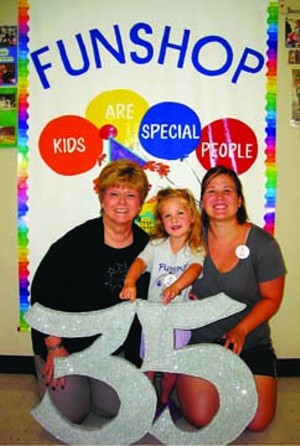 From left are Sharon Entwistle, Aurora Vanmetre and Mary Vanmetre. Funshop marks its 35th anniversary Sat., Aug. 6, 5-8 p.m. at Nelson Center in Lincoln Park.
Sometimes learning looks different than a standard textbook, classroom or exam. Instead it might take the shape of a miniature tugboat or an easel, or perhaps something else altogether. That’s really up to the students to discover.

At Funshop, an early childhood education program supported in part by the Springfield Park District, the “students” are children ages 16 months to 5 years and their parents or guardians. Together they attend weekly classes, encouraged by their teachers to explore the various play stations at their leisure.

Still, Funshop goes beyond teaching ABCs or 123s. It’s a foundation for learning life skills, both for child and parent, says Funshop co-director Sharon Entwistle. Funshop, established in 1976, began as a support group, and 35 years later, that’s still a big component of the program. The majority of the program’s teachers are certified and many have been involved in Funshop from the beginning, either as a parent or as a member of staff, she says.

Funshop co-director Linda Berberet says the children learn social skills, listening skills and even stress management. S.T.A.R. power, which stands for “stop, take a deep breath and relax,” is one element of Conscious Discipline. It is a concept of Dr. Becky Bailey from Florida that Funshop has incorporated into its program. Berberet says children and adults benefit from this lesson: She once heard a Funshop child tell her mom to use S.T.A.R power because her mom was looking tense.

When her daughter left Funshop for kindergarten, she immediately caught the attention of her kindergarten teacher because of the skilled, confident nature she had for her age.

Lahndorff says she remembers one boy who was part of the program in the past who she noticed always played with a space shuttle toy at Funshop and has since become an inventor of sorts within the space sector.

“I love Funshop because it’s like Disney World to a kid’s eyes,” Lahndorff says.

Lynette Nelson, a Funshop graduate, says she also has many memories, but later made a new discovery. Her husband attended Funshop as a child, and they more than likely attended together without realizing it, more than 20 years ago.

The hands-on experience in class was valuable to Nelson, as were the teachers who served as positive role models, and who were like family to her, she says.

“That in and of itself you just carry with you your entire life and that’s what you build upon…it really has helped us in every aspect of our life as we’ve grown older,” Nelson says.

Nelson says she and her husband are looking forward to soon attending Funshop with their son, continuing the learning legacy.

“I think it’s just amazingly wonderful to create a program where children feel connected and loved and valued and I think that’s what Funshop is all about,” Entwistle says.

On Aug. 6, Funshop, the Springfield Park District’s early education program for parents and children located at Lincoln Park, is celebrating its 35th anniversary to show its gratitude for support from the Springfield and surrounding communities over the years.

The celebration will be held rain or shine from 5-8 p.m. with registration beginning at 4 p.m. The free event, which is open to the public, will include activities like juggling, a magic show and Zumba, with a Movie in the Park showing of Toy Story 3 to end the evening.

Grand prizes will also be given including an iPad2 and a $250 Visa Gift Certificate among others. Optional pre-registration can also be made online at www.friendsoffunshop.wordpress.com.

The colors and scents of spring 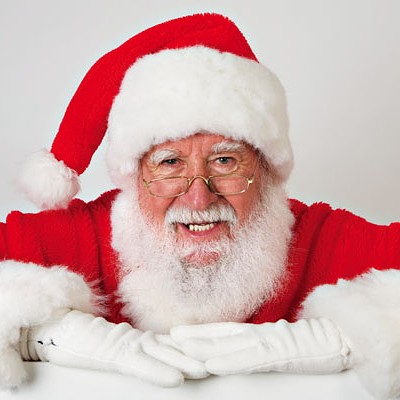 Including agriculture in the broadband plan