Caught in a tiff

Despite feud between city and county, Enos Park TIF finally gets renewed 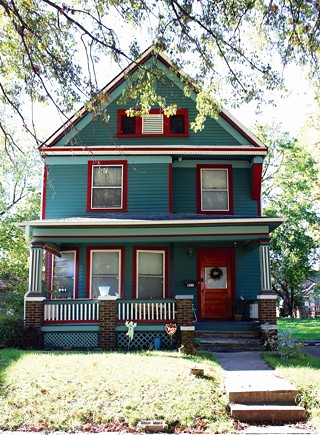 The Enos Park Exterior Rehab program uses TIF funds to provide matching grants to homeowners for exterior renovations. Since the program began in 2017, 28 exterior renovations projects, including this one at 911 N. Sixth St., have been funded. However, the program was put on hold after the TIF expired and no projects were funded in 2021.
Both men say they weren’t motivated by politics. But does anyone believe them?

The latest manifestation of the conflict between Springfield Mayor Jim Langfelder and Capital Township Supervisor Joe Aiello came to a head in the final moments of the legislative veto session last week. Lawmakers approved a measure, which now goes to Gov. JB Pritzker for signature, that would retroactively extend the life of the Enos Park tax increment financing district. The extension was sought by Langfelder after the TIF expired in December 2020.

A TIF district is an economic development tool used by cities that directs property tax dollars generated by improvements in a blighted area toward further improvements in the area.

Langfelder and Aiello have been at loggerheads since at least 2018, when the mayor endorsed plans to consolidate the township and the city. This, of course, would have eliminated Aiello’s position as township supervisor. The township is led by Republicans, and while the city is officially nonpartisan, Langfelder is a Democrat.

“(Politics) played no role from my perspective, when we run we attach ourselves to one party or the other, but when we serve, we serve independently,” Aiello said.

Going into the final days of October’s veto session, Capital Township was the only holdout on extending the Enos Park TIF.

The Springfield City Council has sole say on how TIF money is spent. By holding out on supporting the TIF extension, Aiello said he hoped to leverage the city into ceding some control over how TIF dollars are spent to other units of local government.

“We, the Capital Township trustees, have been in communication with the city for well over a year,” Aiello said. “We've suggested that through an intergovernmental agreement we can do a better job with TIF tax dollars and try to be more accountable and try to be more transparent.

“And we made some suggestions. And there was no interest (on the city’s part.) Capital Township's always been in favor of development. We're in favor of moving our community forward, but we're also good stewards of the tax dollars.”

In an interview with Illinois Times, Langfelder disputed Aiello’s characterization of the negotiations.

The mayor noted that over 12 years, the Enos Park TIF stands to generate $6 million for redevelopment activities, of which $60,000 would be money that would otherwise go to the township.

“So, here's a $60,000 revenue source of a taxing body holding up $6 million that could be reinvested in the area. We offered to give them back the money. But (Aiello) always says it's about transparency, accountability, and greater oversight. … I always go back to the initial conversation which drove it -- the Capital Township discussion, way back when -- about consolidation.”

“There's no hard feelings one way or the other; we got it worked out. I appreciate Joe reaching that point,” Langfelder said. “And you know, I thought it should have been a lot easier than what it was.”

The commission’s role will be advisory, and the ultimate say on how TIF money is spent remains in the hands of the Springfield City Council.

But Aiello said he was pleased that taxing bodies will have more of a voice.

“We are surrendering our money, so we felt like a committee made up that way would create a better direction and better results,” Aiello said.

Enos Park TIF funds have been used to help construct the downtown YMCA, provide matching grants to homeowners to make exterior improvements and provide down payment assistance for veterans and first responders.

“We're just happy that it got done at the 11th-and-a-half hour that night,” said Alderwoman Lakeisha Purchase, who represents the neighborhood. “Our priority is to get things going with our TIF.”

Scott Reeder, a staff writer with Illinois Times, can be reached at sreeder@illinoistimes.com.