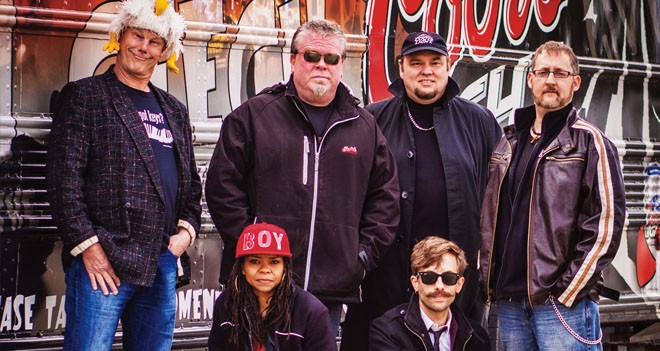 Born in 2001 from an epiphany reached by J Bird (drums, lead vocals) after watching the 1996 Tom Hanks’ film That Thing You Do!, and raised with the consciousness to please a crowd, especially of the female persuasion, this Jacksonville-based band is on top of its game. Winners by far in Illinois Times 2013 Best of Springfield category for best rock/pop band, sponsored by Robert “Chick” Fritz beer distributors through Coors Light, proud inhabitants of a Coors Light band bus and performers at every big venue and festival in central Illinois and beyond, what else can you say about CG and the SSSs other than they rock the house and get the gigs (and other things). Bandmates Peter (lead vocals, rhythm guitar), Majeeda (lead vocals, percussion, Marc (lead guitar, vocals), Buster (bass, vocals), Joker (keys, vocals) and Kerry Ginder (sound engineer, noise complaints) join leader J Bird in bringing diverse personalities into a familial unit that stirs up a batch of funky, rocking, danceable, in-your-face music like nobody’s business that everybody can enjoy.