Schrader all in with Counter

I always look forward to writer/director Paul Schrader's films. In an era of overblown cookie cutter entertainment, it's refreshing to see the work of an artist who refuses to compromise as he continues to explore deeply personal concerns. When he's firing on all pistons, classics (First Reformed, Affliction) emerge; and even when he may miss the mark (Dog Eat Dog, The Walker) his movies are no less intriguing, thanks to his sense of narrative daring and integrity.

His latest, The Card Counter is one of his better efforts. Oscar Isaac is William Tell, a troubled vet who's become a professional gambler. Like so many of Schrader's characters, he's haunted by his past, memories of which are brought to the forefront when he unexpectedly crosses paths with John Gordo (Willem DaFoe), an acquittance from his time in the service. The history they share is thorny, one that prompts him to seek revenge, using a young man (Tye Sheridan) as his instrument to do so. You're better off finding out on your own how these three are connected, but suffice it to say Schrader doesn't disappoint, giving them nuanced backgrounds, each hurtling towards a date with destiny involving redemption and condemnation. Engrossing throughout. In theaters.

Reboots are tricky thing – how do you match the success of a previous film yet provide something new and vital? Director Nia DaCosta proves she's more than up to the task of avoiding this trap with Candyman, an update of the 1992 cult horror movie that manages to not only successfully pay homage to the original but expand upon its premise in a new, dynamic way.

The history of the infamous character is rendered with striking die-cut puppetry, getting viewers up to speed on the mythical killer who's summoned whenever anyone speaks his name five times while looking into a mirror. More than a few foolishly take this dare and pay for it. However, artist Anthony McCoy (Yahya Abdul-Mateen) does a series of portraits of the urban legend, which earn him a handsome profit. The Candyman comes calling because of this offense, with bloody results.

The vagaries of gentrification are front and center, the killer symbolizing the past that is exploited for profit. While DaCosta fails to stick the landing, there's enough right here to make it worth seeing. In theaters. 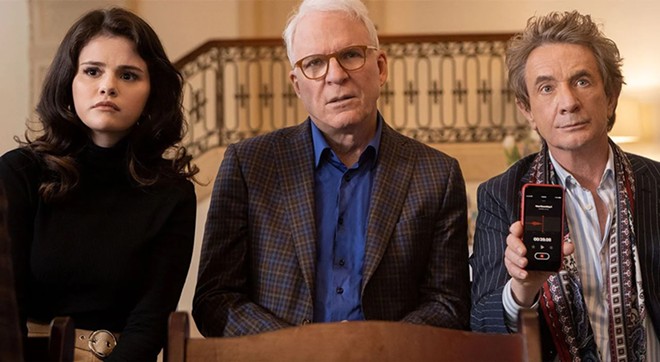 Selena Gomez, Steve Martin and Martin Short in Only Murders in The Building

I never thought I'd see Steve Martin, Martin Short and Selena Gomez listed in the same cast, let alone one for a murder mystery. Yet, this trio is at the center of Hulu's Only Murders in The Building, a surprisingly engaging whodunnit that sports many more narrative layers than the usual genre entry.

Martin is Charles Haden-Savage, a washed-up actor, while Short is Oliver Putnam, a theater director whose glory days have long passed as well. They and the clouded-in-secrecy Mabel Mora (Gomez) all live in the posh Big Apple enclave, the Arcnoia, and end up bonding over their love of a weekly podcast that recounts a recent murder. While the three try to figure out the solution to that mystery, a similar incident occurs in their complex and they set out to solve the crime.

The three principals are all immediately appealing, thanks to the performances as well as their sympathetic nature. Each is hiding a secret we all can relate to, one of them concealing a connection to the crime they're trying to solve. Smart cliffhangers keep us coming back each week, as does the hope that the appealing trio find some degree of happiness. Streaming on Hulu.