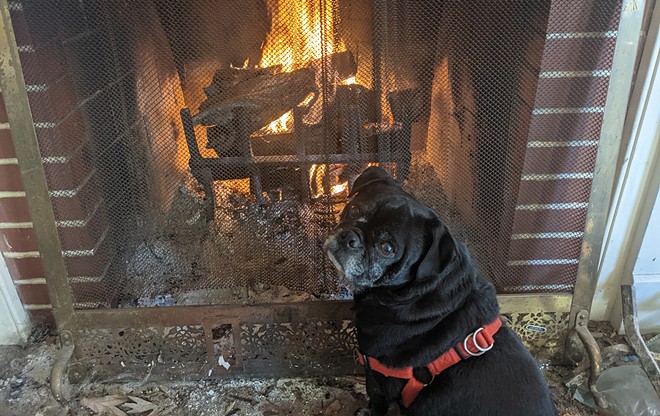 Forget fleece fashioned from polyester. I prefer tweed and cashmere and wool socks and sweaters that weigh three pounds and sheepskin hats with ear flaps. Nothing clears the lungs, and mind, like inhaling that first breath of sub-zero-degree air as you step outside to go cross-country skiing while Champ the Wonder Pug, usually up for most any adventure, pauses at the door, thinking things over.

You can't fix heat, but you can fix cold, especially if there's room inside the garage to park your car while snow falls all night long. Last week fell short of polar vortex, but nonetheless was plenty cold enough.

Hunkering down for pandemic is one thing – no beer parlors in July because you might get sick is no fun. But battening down in February is different, especially since you know frigid won't last forever.

I had acquired firewood last fall, but not enough, and so I'd been stingy, conserving BTUs trapped inside seasoned oak until the time was right. Being lazy, I avoid splitting wood into kindling and instead rely on Presto-style logs to start fires that, once large enough, can last through the night. A few days into cold snap, I awoke to bad reality. The fireplace had grown cold overnight, and I had no pre-fab logs or fatwood or anything else to beckon a blaze, nor did I have a hatchet to make big pieces of wood into smaller ones that might easily ignite. Road conditions were prohibitive. Only a fool would venture out.

I recalled my days as a Boy Scout, when Nixon was president and the world seemed full of possibility. Each winter, we spent a weekend camping in Cascade Mountain foothills to test our toughness and write yellow words in snow behind the scoutmaster's back when nature called. We would compete to see which patrol of four or so could tie knots best, make shelter quickest and otherwise give Daniel Boone a run for his money. My patrol was good at coaxing fire from twigs and pine cones and leaves.

You play the hand you're dealt. There were no twigs or pine cones or leaves in my house, and a fire seemed vital as coffee. What about that stack of documents in the dining room I hadn't touched since spring? This'll never work, I thought, as I toted Candace Wanzo's personnel file to the hearth.

Wanzo, a former Secretary of State employee, awaits sentencing after pleading guilty to fraud in federal court. She ran a DIY licensing agency within the state's vehicle licensing agency, pocketing cash from folks who got tabs from a supply she kept in her office. As some might recall, I had to sue the secretary of state to get her personnel file. When I won, the file, deemed too big to transmit electronically, was delivered in paper form.

One by one, I fed pages of Wanzo's personnel file, from expense reports to forms documenting raises, into flames that grew then ebbed then grew again beneath a yule-sized log as I hoped for the best. There was lots of paper because Wanzo worked for the state for a long time.

Finally, a flicker lasted, growing bigger and bigger and bigger and yet bigger, with snaps and pops and sparks sufficiently robust to roust Champ from slumber. He emerged from bed and relocated to fireside, where he remained the remainder of the day. He may not be much on skiing, but my dog is good at smelling smoke.

Wanzo was a bit player in the scheme of things, a crook hired by a Teflon politician who either should have known better or didn't care – she got caught embezzling six figures from Southern Illinois University before Jesse White hired her. It was good to see the file, which contained nary a disparaging word until the very end, accomplish something.

REPORTERS DESERVE SHOTS: I've been asking folks ranging from dogcatcher to governor when the working press will be vaccinated. Call me biased, but I think that the Fourth Estate should be as high a priority as legislators and inmates. Certainly, there are fewer reporters in Springfield than lawmakers or lawbreakers – if one State Journal-Register reporter gets sick, that's a third of the news staff. We go to city council meetings and demonstrations and courthouses: Wherever the story is, we go. I've been intentionally coughed on by a homeless woman who called COVID a hoax, and I've been screamed at by maskless protestors who didn't grasp social distancing.

"It's a personal decision," Sangamon County public health director Gail O'Neill answered at a press conference last week when I asked how reporters standing together comported with the sign behind her urging folks to stay six feet apart inside the new fairgrounds vaccination center. No, it's our job. National Guard troops assigned to the center were getting shots of surplus vaccine, so I told O'Neill to call me if there were extras in the future. On Saturday, I got a call and I got a shot.