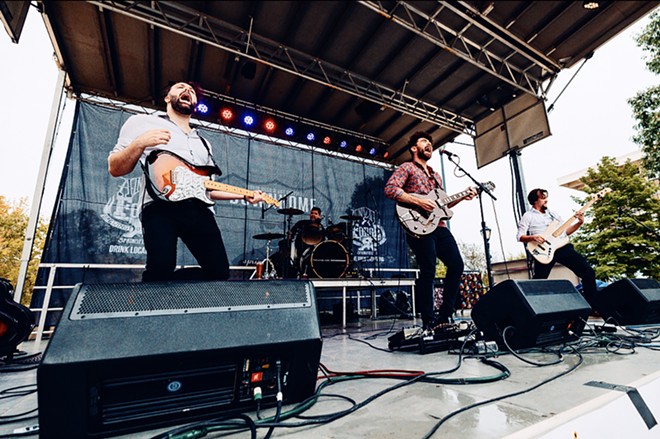 Now that the 2021 Illinois State Fair is behind us, we can take a deep breath and continue on our adventures in local live music as before with much ado about a lot of things ahead.

First comes a tribute to Robert "Butch" Emil Ramelow, a Springfield-area music icon who passed away May 23 after a long and productive life as a performing guitarist, singer and songwriter. Butch played guitar and sang with several groups, including the Stingrays, a mid-60s Springfield band, then later fronted his Butch's Backstreet Band for many years. Both these combos recorded 45s that you can listen to on YouTube. Performing as a one-man band in his later days, Butch played every Sunday for 20-some years at the Buckhart Tavern. This Sunday at Boondocks (1-6 p.m.), friends, family and fellow musicians are gathering to play music, swap Butch stories and commemorate the legacy of this luminary of the Springfield music scene. Longtime local drummer Jimmy Bonefeste originated, organized and will emcee the event, with music provided by Mississippi Leghound, a Hipbone Sam band reunion and many other musicians and groups joining in to jam along. This is not a benefit or fundraiser, only a heartfelt celebration of how Butch Ramelow spent a lifetime giving his gift of music to others and all that radiated from that shared talent. Join in if you can.

Here's good news as SamJam's End of Summer Bash is back at the Macoupin County Fairgrounds near Carlinville this Saturday (12-11 p.m.). As always, proceeds go to the NF Midwest organization to aid in research of Neurofibromatosis, the debilitating disease that Sam Oswald, the namesake of SamJam, has been successfully battling for decades. Peter Oswald, Sam's father and organizer of the event, decided to "try something different" than the usual progressive bluegrass of past years and set up a tribute concert with four bands covering well-known acts such as John Prine, Neil Young, Jimmy Buffett, the Rolling Stones and Grateful Dead. Find out more at samjam4nf.com and come do good while having a good time.

On Friday night at the Gin Mill (old Bar None), a new group from Springfield called The Lovelorn hosts a celebration of their recording debut, "May You Find Worth in the Waking World," originally released on Feb. 12, 2021. Describing their music as "back woodsy blues vibes with a modern twist," band mates Keagan Cross, John Peters, Richard Stone and Harrison Ketchum will be joined by opening acts Lone Canary and Spencer Stokes, with the action starting at 8 p.m.

This Friday and Saturday, a popular festival returns when the Old Capitol Blues & BBQ sets up on the streets of downtown. Along with touring bands Ana Popovic and Joe Moss Band (Friday) and Big Head Todd & the Monsters and Wayne Baker Brooks (Saturday), a couple of well-loved and well-respected local groups are back in action, as the Mary Jo Curry Band plays Friday and Black Magic Johnson hits on Saturday. Without revealing too much personal information, MJ and Reggie B are back to feeling good, and we all could not be happier, nor luckier, to be the beneficiaries of such fantastic hometown, homegrown talent.

On Saturday at 1 p.m., the Illinois Central Blues Club hosts a contest to determine what artists will represent the ICBC at the International Blues Challenge this January in Memphis, Tennessee. Winners receive your admiration and a stipend to attend the IBC.

Now head downtown and enjoy this full-on-for-fun festival that's like no other one around. Remember to check our listings for all the other many, many music events happening.