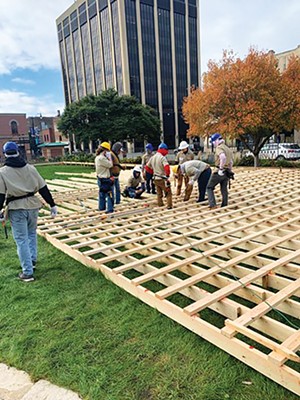 Capital Area Career Center building trades students building the platform.
Ice skating on the lawn of the Old State Capitol sounds like a lot of fun. As much as we would like to think the concept is new, there is a historical note that gives us a glimpse of a cold day more than 155 years ago, when a group of local children first hatched the idea. History not only provides context but also illuminates the ice ahead.

On Jan. 20, 1866, the Daily Illinois State Register reported that several youths were "attempting to skate upon the ice which covers a portion of the statehouse yard." The writer was stirred by a sense of sympathy for the youth, "in not having a broader field for practicing the healthful and graceful exercise." It must have been a cold and wet winter, as others could be found skating in street gutters and on sidewalks. The scene prompted a call to action to ensure "that by next season there is a skating park somewhere in the outskirts of the city, where the little folks and even the larger folks can occasionally repair and enjoy themselves without limit or restraint." Less than a year removed from the end of the Civil War, it is easy to understand the writer's interest in an ice rink. Of course there is a possibility that kids or adults had at least tried skating on the yard of the Old State Capitol earlier.  The 1866 event is the first that we know of. And it isn't difficult to imagine our city yearning in those dark and cold days for something thicker than ice to develop, something on which it could regain its posture – in a word, community.

Last October, in 2020, the Sangamon CEO students were feeling the heavy toll of the COVID-19 pandemic. Sangamon CEO is an entrepreneurship program for area high school seniors that forges community and business leaders. In a class discussion, they shared the sense of anxiety they were experiencing. As such, the class decided to survey the community to learn who else may have been having those same feelings. More than 60% of the respondents of all age groups reported being depressed or anxious. With this in mind, the students decided to act. In an ideation session in class, one idea surfaced and gained traction: outdoor ice skating. Initially, most students were skeptical. Springfield had not had an outdoor ice skating rink in many years, and the project itself seemed large and daunting. How much money would be needed? After several days of research, the class learned that building an outdoor ice rink with real ice would require extensive funding, and Springfield weather would pose almost an insurmountable challenge. However, the students also researched an alternative: synthetic ice.

The students were inspired by Rockford, which built the largest synthetic ice rink in the world. Rockford's Davis Park features the BMO Harris Bank Winter Wonderland, a 12,000-square-foot artificial ice rink. The students pitched their idea to local businesses and secured more than $70,000 in funding. They designed the ice rink, purchased the material, and finally opened the rink to the public in the lot behind Scheels on Dec. 28, 2020.

The catalyst that moved the students to action in 2020 was low morale in the community. Recognizing the spirit of the project, the Sangamon CEO class of 2021-2022 pursued the option of moving the LRS Ice Rink to the heart of Downtown Springfield. The Old State Capitol is a rich historical symbol that stands as a testament to trying times and dark days in our community, but it is also a beacon of hope that even the darkest of days will pass. In the shadows of Abraham Lincoln and the memory of kids playing on the ice on the Old State Capitol lawn a century and a half ago, while the pandemic continues to inflict pain in our community and the world, this year's Sangamon CEO students set their hearts on this location.

Like the historical writer who witnessed youth skating downtown in 1866, what we are really talking about is not only ice but community. Sangamon CEO's LRS Ice Rink – in partnership with this historic site, the Illinois Department of Natural Resources, the City of Springfield, and the Office of the Mayor – is a gift from our youth that can help downtown, and our city at large, regain momentum.

Whether you skate or not, you are invited to join this season in celebrating our community by visiting the Old State Capitol grounds and cheering on the energetic students who are leading this exciting enterprise. What's ahead is more than ice, and we don't want you to miss it.