Wisconsin man may be evicted from group home 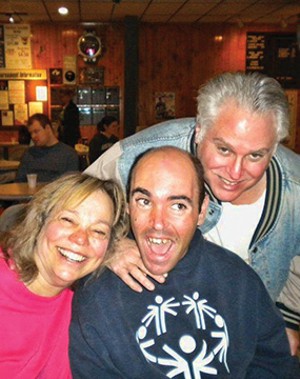 
Keith is one of 44 people with developmental disabilities whom Illinois sent to live in Wisconsin during the 1990s. Now, Illinois’ lack of a state budget threatens those out-of-state dependents’ care. The Illinois Department of Human Services is scrambling to prevent the dependents from being kicked out of their group homes.

Keith grew up in Illinois, and his parents still live here. Sharon Drazner, Keith’s mother who lives in Highland Park, says Illinois didn’t have many community-based group homes for people like Keith during the 1990s, so the state paid to have him placed at a group home in Wisconsin when Keith was almost 18. He is now 38.

In February, Keith’s parents received a letter from Keith’s group home in Wisconsin saying that they hadn’t been paid for Keith’s care by the Illinois Department of Human Services since October 2015. If the group home doesn’t receive payment soon, Keith will likely be evicted on March 30, Drazner says.

“It’s been an awful month since we got that notice,” she said. “That letter in February was the first indication we had that anything was wrong. We didn’t know they weren’t getting paid. We knew there was no state budget; we just didn’t realize it would affect people like Keith.”

Marianne Manko, spokeswoman for the Department of Human Services, says the department has sent families of dependents a letter guaranteeing that the agency will have resolved every case by the end of the month.

However, Sharon Drazner says the letter promises “continuity of care,” which she says only means Keith and other people in his situation won’t end up homeless. It doesn’t necessarily mean that Keith will be able to stay in his group home, she said. Drazner believes Illinois is trying to get Wisconsin to pick up part of the tab for Illinois’ 44 out-of-state dependents, which Drazner says is unlikely to happen.

“My feeling is just very pessimistic,” she said. “There has been a lot of miscommunication so far, and we’ve been told things that turned out not to be true. We still don’t have any specifics.”

Drazner says Keith’s vocabulary is limited to about a dozen words, so his communication is limited. Because of his frequent seizures and the fact that his brain doesn’t go into REM during sleep, someone has to monitor him all night at his group home.

That level of care is difficult to find, especially on a month’s notice, Drazner says. Illinois no longer makes out-of-state placements like Keith’s, and the trend in recent years has been to place clients as close to their families as possible. Drazner certainly isn’t opposed to that, but she says the openings available in Illinois are limited.

Kate Drazner Hoyt, Keith’s younger sister, says Keith has thrived at the group home, where he has made friends, learned to write his name and do household chores, learned social skills and even held a maintenance job.

“The fact that his fate is so up in air is really hard because I can’t picture what his future is going to look like,” Hoyt said.

Hoyt says Keith’s predictable routine at his group home has allowed him to sleep more regularly, which reduces how often he has seizures. If he’s uprooted from his group home, Hoyt says, he’ll become unstable and likely have more frequent seizures.

“His quality of life will plummet,” Hoyt said. “I cannot speak for the other 43 individuals at risk of losing their homes, but I am sure the consequences for them will be similar.”

Drazner says she’s glad to have the letter from DHS reassuring her about Keith’s care, but she is preparing for a potential legal battle nonetheless.

“If we have to get a lawyer and go to court, where is my kid in the meantime?” she said. “It’s not the end of this mess. I still can’t say where my son is going to be at the end of the month.”