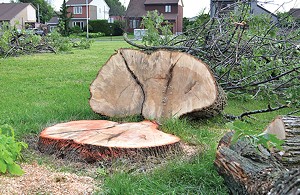 Because of the ash borer, Springfield has cut down hundreds of ash trees and plans to take down 2,000 more.

Perhaps the wisest thing that Gov. J.B. Pritzker said during last week's budget address came near the end, when he talked about why he wants to increase funding for the Department of Children and Family Services.


It is too bad that Pritzker wasn't at the previous night's Springfield City Council meeting, when aldermen took a hatchet to the municipal budget and hacked away money for trees, which, being trees, weren't there to defend themselves. Tree huggers were, and they made points that, if not irrefutable, sounded pretty darn strong. Which mattered not a lick.


When Paul Bunyans disguised as alder-people started, the budget included $200,000 for trees. When they were finished, the appropriation had been cut to $50,000.

Ward 10 Ald. Ralph Hanauer roared like a chainsaw as he ripped the idea of spending six figures on trees.


Apparently forgetting the concept of contractors, Hanauer observed that the city doesn't employ sufficient work crews to plant as many trees as the mayor's budget would have allowed. While saying he isn't against trees, he expressed a preference for pavement over pines. "It's a lot of money we can use on roads or sidewalks," the alderman opined. The city last year spent $33,000 planting trees, said Hanauer, who pointed out that $50,000 is more than $33,000. "To increase the number of trees we're planting is pretty dag-gone generous," he said.


It's rarely good form to oppose trees, and so aldermanic votes against trees were couched in terms constituents might understand but nonetheless had me stumped. Ward 6 Ald. Kristin DiCenso, who sponsored the amendment to slash the city's tree budget, said it isn't a matter of hating trees. Rather, she explained, she was concerned that her colleagues on the council would eliminate all the money for trees if the appropriation wasn't reduced. Fairness, she said, also is an issue. Last year, she said, the city replaced 161 ash trees in Ward Two "and the rest were scattered all over the city."


Springfield suffers from a serious tree deficit, thanks in part to the biological miracle – or disaster – that is the emerald ash borer. Public works director Nate Bottom told the council that the city has removed between 1,500 and 2,000 ash trees and planted fewer than 300 replacements. Jan Von Qualen, chairwoman of the Urban Forestry Commission created last summer by aldermen, said more than 1,500 trees still need to come down. "The need to plant trees is urgent," Von Qualen told the council. At $200 for each new tree, the reduced budget approved by the council will pay for 250 trees that'll take more than a few years to get big enough to provide serious shade.

Not all trees are created equal, as anyone who has a sweet gum or ash tree in their yard can attest. Poor planning is to blame, it seems, for part of the mess we're in – if we'd planted oaks, say, instead of sweet gums and not planted so many ash trees, we might not be cutting down as many trees as we are cutting down. That's why half of the $200,000 would have been reserved to count trees and otherwise figure out what we have now and where we're headed.


"Without knowing the condition, location, species of the tree, we cannot know what changes are needed to make it a stronger, healthier, more diverse forest," Von Qualen said. Fellow forestry commissioner Randy Belville said a survey likely would cost less than $100,000, and grants are available. Lots of towns, including Bloomington, Champaign and Mount Prospect, already have completed surveys. After a critical report from an inspector general who concluded that a willy-nilly approach to planting and maintaining trees wastes time and money, Chicago is working on one.

The replacement was concentrated in an east side neighborhood to replace fallen ashes and demonstrate what a replanted area should look like, Belville says.


Ward 4 Ald. John Fulgenzi observed that the city would be in a better position to land tree-planting grants if we knew how many trees we have and how many we need. "It sounds like if we don't have the tree inventory, we can't get any matching funds," Fulgenzi said. "Without this tree inventory, how can we select the right trees? I don't know the right tree to plant. I don't know if anyone up here does. The point is, this might be how we got all these emerald ash borers."


Professing a fondness for shaded sidewalks where mothers push baby strollers, Ward 7 Ald. Joe McMenamin was the only alderman who joined Fulgenzi in voting against reducing the tree budget. Ward 8 Ald. Erin Conley seemed to want her tree while cutting it, too. "I'm not opposed to the concept of a tree survey, but I am opposed to taking money from tree plantings for that, this year, if this amendment passes," she said before voting for the amendment.


In other budget news, the council approved a fourth security guard for the library ($64,721) after the library director said the position wasn't needed, two public works jobs ($130,000) that the mayor didn't request and a clerk for the Convention and Visitors Bureau ($61,477) that also wasn't in the mayor's spending plan.