Breakfast of a champion 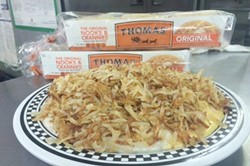 To such names as A.L. Ide, Ira Weaver and George Celani (who in the 1980s invented an express air package service out of thin air!), we should now add to Springfield’s roster of distinguished inventors that of Mike Murphy, who devised a process to turn an English muffin into a $25,000 check.

Yes, the breakfast horseshoe served at Murphy’s Charlie Parker’s Diner won the $25,000 top prize in the national recipe competition staged by the makers of Thomas’ English muffins. That company is understandably eager to find new ways to entice people to eat English muffins without realizing they are eating English muffins, and the sausage gravy in Murphy’s version meets the contest criteria wonderfully. You could smother almost anything in sausage gravy and people will eat it up, as Bill Clinton’s career in office proved.

I am no epicure. I had my first horseshoe at the old Norb Andy’s; what I was served looked as if it had been dropped on the way to the table, which said “home cooking” to me. The dish is the perfect exemplar of what Pat Clinton, one of my editors at the Reader in Chicago, called Midwestern cuisine blanc. How fondly I recall Thanksgivings at Grandma’s, with mashed potatoes and cream corn and white bread rolls and chicken – breast meat, please – and chicken noodles and gravy and milk, and, if you had room, apple pie and vanilla ice cream. Even the hot sauce was white; when Grandpa wanted to liven up a dish, he did so with horseradish. Indigestion wasn’t a risk but snow-blindness was, ha ha ha.

I will not here delve into the history of the dish’s evolution but refer curious readers to the account I regard as authoritative – Julianne Glatz’s “What happened to horseshoes?” which appeared in the Feb. 2, 2012, edition of this paper and borrows from the work of Tony Leone, proprietor of Pasfield House. It was there that what had long been a mystery to me was solved. The dish owes its name to the fact that the first horseshoe was made from whole ham, which when cut from the bone leaves a slice shaped roughly like a horseshoe. The editor in me complains that no version made without ham of that sort thus can be called a horseshoe, but our jobs creators are not fettered by truth-in-menuing laws that might stifle innovation.

As Glatz reminds us, the dish invented by Leland Hotel Chef Joe Schweska was perfect fare for the Leland’s faux pub known as the Red Lion Room. Inevitably, the horseshoe became vulgarized once it slipped from its creator’s hands, as what had been created by a chef was cranked out by short-order cooks. You couldn’t really make it better so restaurateurs outdid each other by making it bigger. Once you couldn’t make it bigger, the only thing left was to make it weirder. I am told, but refuse to believe, that Lindsay’s Restaurant made one using brioche, filet mignon, crab meat, sweet potato fries and Cajun cream sauce. This is the gold-plated faucet approach to luxury – expense in the service of bad taste.

I was happy to hear that Charlie Parker’s won by going back to the basics, but not only for that reason. I was interested in the outcome because the diner was founded by an old school chum of mine, one Lannie Higgins, who opened Charlie Parker’s in a war surplus quonset hut in 1991. (The building had been a maintenance shed for a while, which somehow seems an appropriate antecedent for a diner.) I knew and liked Lannie – no one I knew ever called him Lawrence  – when we were students at Washington Junior High and later at Springfield High. There was nothing about the teenage version that hinted at a future as a hash house impresario, although even then Lannie looked as if he enjoyed his time at the table. Lannie no longer owned the diner, but it still seems a pity that he died last summer and didn’t see his old joint make the news.

Working on this column, I got to thinking about what it takes to make a successful diner dish. You take familiar ingredients – people won’t eat it otherwise – and mix them into new arrangements that are new enough to be intriguing but not so new as to be off-putting. Taking into consideration the realities of life in a short-order kitchen, you must also structure the dish so it can be assembled each time without a lot of fuss and delivered to the table while it’s hot. And you have to do it at a low price.

Which, I realized, is very like writing a weekly newspaper column. So Lannie, this one’s for you. 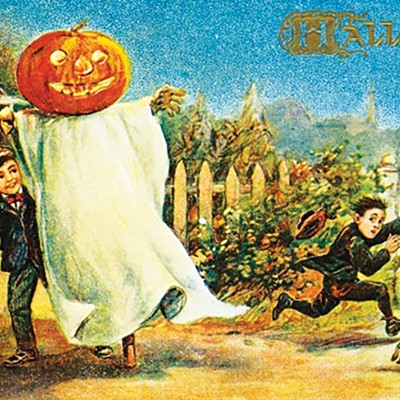