Club bounces back, with a new financial strategy 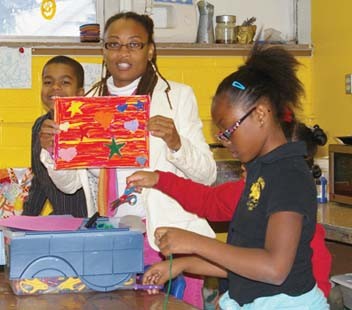 PHOTO BY RACHEL WELLS
Letrice Ware leads students at the Boys and Girls Club through an after-school art project.

The Boys and Girls Club of Central Illinois is back and moving forward, says Douglas King, the organization’s new full-time executive director and the first since Jill Schurtz left the organization in February 2010.

King became executive director of the organization, known for its youth development programs, in January. He retired in 2009 from a 22-year career in state government and the Illinois State Lottery.

This time last year the club was all but dead, as the nonprofit had essentially pulled out of its 300 S. 15th Street location from August 2010 until February 2011, leaving the Springfield Urban League in charge of the building.

Without a full-time director from February 2010 until King’s arrival, the club last year skipped its annual fundraising gala, closed its satellite Springfield facility, the ABC Boys and Girls Club south of Bunn Park, and got a late start on many of its after-school programs.

The organization decided not to renew after-school grant programs in Cass and Scott counties, leaving a Boys and Girls Club of Central Illinois presence only in Sangamon, Morgan and Greene counties. “I think we realized that while we were doing well three years ago, our tentacles might have been out there too far. We had purposely pulled back and our emphasis is here in Springfield. We love those programs in Jacksonville and Roodhouse, and they need those programs there, so that’s primarily why we’re still there. But our emphasis is here in Springfield,” King says.

The group also closed a Jacksonville facility (its remaining programs are in the schools) and has over time seen its budget diminish from about $3 million to about $1.2 million, King says.

“I think a lot of nonprofits went through, and continue to go through, struggles to try and raise money. I don’t think the Boys and Girls Club was alone,” says Peter “Cass” Casper, the president of the club’s board of directors. “We’ve gotten our house back in order.”

King says the organization’s struggle to remain viable in recent years was largely due to too much reliance on government funds. “If you’re looking for support, from the state of Illinois for example, either you see programs cut back or payments are slow.” He blames program cuts as well as a movement toward more reimbursement-based grants for some of the club’s past financial problems. “My greatest need right now is cash-flow. The way our major grants come in, we have to expend the money first and then be reimbursed by our funders.”

King says that at least 95 percent of the club’s funding comes from government sources at this point. That’s too high a percentage and the organization needs to better tap into private donors, both individuals and businesses, King says.

“We need to be at a point where if the program’s good enough and successful enough to initiate and implement, then it ought to be good enough to continue even when that other funding stops. One of my tasks is to build sustainability plans,” King says.

To that end, this year the gala is back, scheduled for Oct. 29 at 7 p.m. at the Hilton Springfield, and the organization is working on being more organized and capitalizing more on smaller-scale fundraisers, such as a Nov. 15 fundraiser at Texas Roadhouse that will send 10 percent of dinner bills to the Boys and Girls Club. King says the club is also going to work to better market itself. “We still have people who say ‘I didn’t know you guys were open.’ So that’s part of my responsibility,” King says.

The razor blade in the apple

No easy answers for returning to school