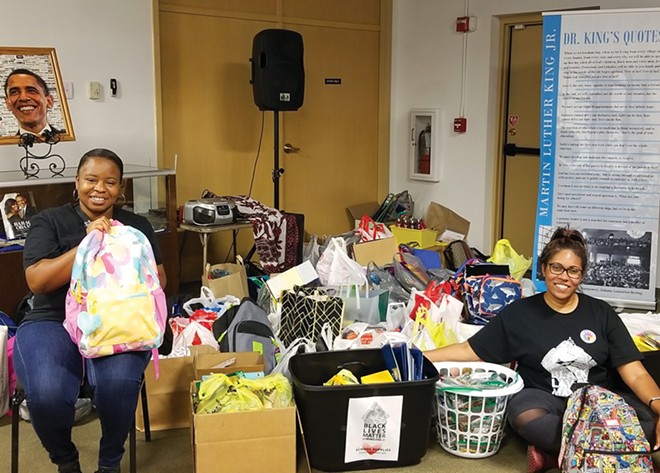 
Black Lives Matter Springfield has been cautious about planning demonstrations as of late, given public health concerns. The rally it held this year in the wake of the police killing of George Floyd was organized as a car procession. That way folks could participate without running the risk of interacting with an infected person. To the organizers' surprise, several thousand participants showed up. Since then, it's been a whirlwind of activity.

Black Lives Matter, now an international organization, was founded in 2013 as the result of the acquittal of the vigilante who killed Trayvon Martin, a Black teenager in Florida. The movement grew after the police killing of Michael Brown in Ferguson, Missouri, in 2014, and took root in Springfield in 2016 after the police killings of Alton Sterling and Philando Castile. Co-founders Sunshine Clemons and Khoran Readus are still at the helm of the capital city's chapter, which is currently seeking nonprofit status. That's a requirement to be recognized as an official chapter within the national organization. It charges on unofficially, and Clemons said it has gained interest in recent weeks. "Our volunteer list has grown by 25 to 30 people in the last month, which is pretty significant," she said.

The pair teamed up with the Springfield and Central Illinois African American History Museum to host a school supply drive and help people register to vote and fill out the census on Saturday, July 25. The event drew attendees such as Springfield city council members and Betsy Dirksen Londrigan, a nominee for Congress. Clemons and Readus said they have been in ongoing conversations with law enforcement and activist groups. The momentum of rallies, "got us in the doors for all these meetings that we're having now," said Clemons. A top priority remains addressing police relationships with the community.

That issue was top of mind the next day, July 26, when a couple dozen people gathered outside the Statehouse to rally against police brutality. While not an official function of Black Lives Matter, the movement's resurgence has spurred more people to get engaged in such events. John Keating was one of the organizers. He helped found E.A.T in the wake of the killing of Floyd, a Springfield group that stands for Education and Action Together. Keating, a rapper, has created a public platform around his activism related to multiple causes, including his counter-protesting at "Reopen Illinois" rallies. "I was more of a pro-mask protester rather than an anti-reopen (protester)," said Keating. "It resonated with far more people than I thought that it ever would, which gave me a platform that I've never had." As a result of his increasing involvement addressing political issues, Keating is now running as a Green Party candidate in the 96th House District race for the state legislature.

William Crawford, a 20-year-old from Springfield, co-organized Saturday's event and has traveled with E.A.T. to smaller communities such as New Berlin and Pawnee to address systemic racism. "The more we get people to follow behind with what we're trying to do, the bigger the moves that we'll make, and the more change that we'll see," he said before addressing the crowd and speaking about instances where he felt unfairly profiled by police as a Black man.

Keating spoke during the rally of changes he wants to see in the way the city handles instances of alleged police misconduct. A police review commission tasked with auditing internal Springfield Police Department investigations has barely met in recent years. "One of the things that we're working on here locally is getting more local people, local activists, more diversity, more representation on that board – some more teeth to it, because right now it's not doing shit," Keating said.