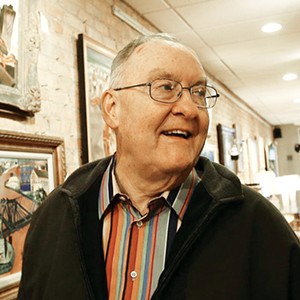 James R. Thompson, the biggest (six feet six) and longest (14 years in office) governor Illinois ever had, died on Aug. 14, 2020, in Chicago at 84. His rise as a politician coincided with that of this newspaper, and to those of us working at Illinois Times in those days he was a familiar, if often exasperating, character.

Senate President Don Harmon observed, "No one enjoyed being governor more." Certainly, no modern governor did. Inside the big man was a little boy with a sweet tooth who in January 1977 found himself in his own candy shop. He ate it all up – the corn dogs, the applause, the press attention, the chauffeured rides.

Thompson was a better politician than he was a governor because his were a politician's virtues. Likeable himself, he genuinely liked people and people knew that. He was endlessly fascinated by Illinois' many tribes. He mimicked their ways and their speech while he was with them. This was not affectation or pandering, or at least not only affectation and pandering. He lusted to be part of every crowd, not merely be among it, and fell naturally into the cadences and intonation of his hosts. At a black church he felt the spirit; at the county fair, he went down home; at a football game he led the cheers.

His zest for campaigning was legendary. He won every time he ran but he was lucky. Campaigning was as distasteful to the patrician Adlai Stevenson III, our Knight of the Doleful Countenance, as it was fun to Thompson. Nonetheless, Stevenson very nearly beat him in 1982 in a nasty campaign. (Stevenson said during that campaign that if he was elected governor he would name the new state building in Chicago after Thompson, because "it's big, it's ugly and it doesn't work.") Stevenson that year was beaten not by Thompson but by the Illinois Supreme Court, which refused his request for a recount; in 1986, when he again ran against JRT, Stevenson was beaten by Lyndon LaRouche when the Democratic ticket was highjacked by his followers, forcing Stevenson onto a third-party ballot and out of contention.

Thompson's vanities were small and harmless, although his complaints about what he saw as the poor pay and perks offered governors were the least attractive thing about him. His pretensions were almost endearing (among them his boyhood dream to someday be president). Alas, he never had the national career he dreamed of. He was a pragmatic and moderate Republican at a time when moderation no longer was respected. Perhaps more decisively, he seemed to strike national party elders as callow.

It's been nearly 30 years since JRT left the mansion. Was he any good? Certainly he had his virtues as a chief executive. Not until the election of JB Pritzker has Illinois seen a governor of Thompson's intelligence (although Pritzker came into office with a better education and broader experience). He was a quick study and he realized that legislative politics was a matter of getting things done, not striking poses. He saved the Dana-Thomas House for the public and saved the governorship for Jim Edgar, whom he hand-groomed for the job.

Unfortunately, he never dared enough to become one of Illinois's great governors in the mold of Lowden or Horner or Ogilvie. Maybe that was just because he wasn't interested enough in government. Not for him the Obama-ish mastering of every brief. He preferred to hire smart people and let them do the thinking. This worked well enough when it came to the mundane matters of governance, but on substantial issues on which Illinois needed leadership, he drew a too-convenient line between views of Thompson the citizen and those of Thompson the governor.

This was glaringly evident when it came to women's rights. Thompson was for the ERA, but he refused to risk his standing with the right wing of his own party to push to get it passed. The governor's trick back seemed to give out every time an ERA vote approached, so reliably that some reporters used the state of the governor's back to predict such votes the way some people forecast a storm when their big toes throb. That reticence was a big reason the amendment failed in Illinois, and thus in the U.S.

Thompson's career out of office was undistinguished. As the rainmaker for one of Chicago's top law firms, he made himself rich as he always wanted, so presumably he died a happy man. But that career was blighted by his derelict performance as a board member of Hollinger International while Canadian billionaire Conrad Black looted the firm – a reminder that to a Republican, law-and-order applies to the streets but not to the corporate board rooms.

For all his faults, Thompson was remembered fondly by party officials and colleagues. He was probably as good a governor as he could have been and maybe slightly better than Illinois deserved; a great governor can only be produced by a great state.

James Krohe Jr. is a long-time contributor to Illinois Times. Many of his columns and articles for IT can be found at The Corn Latitudes, his archive of his Illinois work at www.jameskrohejr.com.