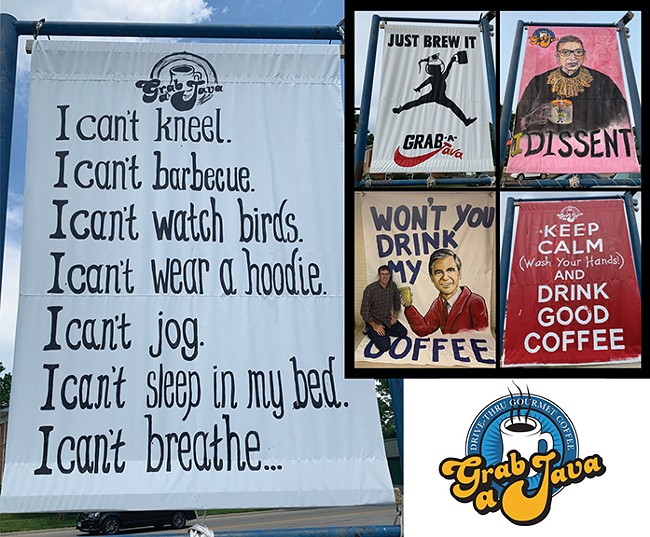 For more than 20 years, the banners at Grab-A-Java have been catching the attention of motorists. Original owners Pete Lazare and Meg Evans opened the drive-thru coffee shop in 1996 on South Sixth Street, one of the first in our city to serve a quality brew and fancy coffee drinks.

Lazare bought mistinted cans of paint and painters' drop cloths and, despite his total lack of art experience, became a local phenomenon, making quirky, quippy and often timely and touching works of art. In 2004, Lazare and Evans built a second location on Hedley Road, with Lazare's banners again grabbing the eye of commuters and shoppers.

Lazare and Evans were in the process of selling the business to longtime customer William Legge in 2018 when Lazare fell ill with pancreatic cancer, passing away shortly after the business was sold.

Legge kept to the established business model, though admitted, "It became a struggle" at first to figure out how to put up new banners on a regular basis. Two years into owning Grab-A-Java, banners continue to remind passersby that few things in life are more satisfying than freshly brewed gourmet coffee and a witty visual joke.

"I couldn't be more pleased," says Legge. Banners at the Sixth Street location are primarily made by sibling artists Christy Freeman Stark and Troy Freeman. Christy Freeman Stark is a founding member of DIM Art House, a studio and gallery space which opened in 2019 on MacArthur Boulevard. Troy Freeman is the lead artist and founder of Free Sky Studios, which focuses on painting signs and murals, big and small. Banners at the Hedley location are primarily made by employees of the coffee shop. "They'll get together and have a paint night," says Legge.

Almost all of Lazare's banners were digitized, though some were too old and brittle to do so. A compendium coffee table book featuring 70 banners was created, with a release party originally set for March 2020. That was canceled, but will be rescheduled when "COVID numbers allow us to do it safely," remarks Laura Lipscomb, manager of the Hedley location. Pre-orders are still being taken on the website, and both books and posters will be available at the release party, which will hopefully happen in 2021.

Until then, have a pretty good day.