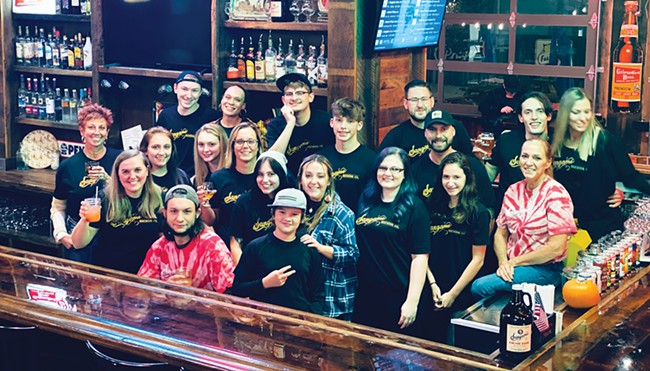 With a tag line like "History in every pour," it's no wonder that our readers voted Sangamo Brewing as the best new bar. Sangamo Brewing is a partnership between Tom Noonan and Jason Butler. Butler previously operated Fat Willy's at the same location, which has now been heavily remodeled, while Noonan, a lifelong collector of brewery memorabilia, had always wanted a bar and restaurant to show off his impressive collection. Hence the history tag line – and Sangamo's fairly large footprint does ooze brewery history, with nearly every inch of the walls festooned with all manner of breweriana. It truly is an impressive collection. But, with the onset of COVID, we think that Sangamo hit a home run with the addition of garage doors that open up to an outside beer garden. Couple that with plenty of light, and you've got a winning combination.

Sangamo's bar is impressive, as is its beer list, which is replete with Sangamo's own house brews and specialty cocktails. Thankfully, there are also non-craft alternatives for those who don't measure their worth by how much hops they can tolerate per each 12 ounces. Not sure what you want? Then order the taster or try a flight. If the weather cooperates, make sure to enjoy Sangamo's expansive outside beer garden. And if you need to soak up some of those drinks, Sangamo has a menu with plenty of options, but that isn't so large that consistency and quality suffer. Sangamo's focus is traditional microbrewery fare consisting primarily of appetizers, tacos, salads, shoes, sandwiches and baskets. Most items come with fries, but for an additional charge, diners can substitute in a variety of premium sides such as tater tots, onion rings, soup or cheese curds.

One of Sangamo's goals was to "achieve a must-go, must-see status as a Springfield and Illinois institution" by becoming the place that everyone in the area must visit and experience. Our readers certainly think Sangamo Brewing Co. nailed it.

WINNER AND FINALISTS: DRINK AND FOOD