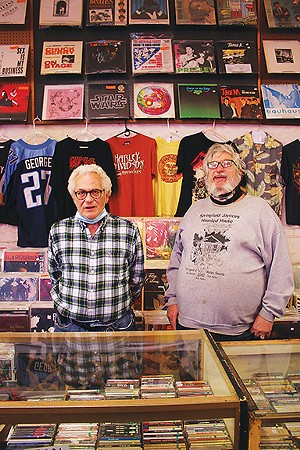 If downtown Springfield has a dorm room, it's somewhere in Recycled Records. Maybe in the basement – after all, downstairs is chockfull of couches and other furniture, making Recycled Records one of the few record stores on the planet where you can buy a chair, a lamp, speakers and everything else you need to replicate the famous blown-away poster from the 1980s produced to promote Maxell cassette tapes.

There is no truth to persistent rumors that Abraham Lincoln sawed boards for the wooden floor on the main level, but it would not be surprising, given the worn appearance and creak volume. Plenty of CDs and vinyl are for sale, of course, but equally intriguing are the jackets, lamps, neon signs, books, jewelry, postcards, lighters and just about anything else you can imagine tacked onto walls and stuffed in display cases. Owner Mark Kessler, along with his brother, Gary, buys records and stereo equipment and practically anything else, legally, that he thinks he can resell, legally, and his tastes tilt delightfully weird.

He also knows his music, as does his staff: Recycled Records is not a place to play name-that-tune if you're betting big money, but it's a great spot to uncover impossible-to-find recordings and stuff you never imagined could exist. Hardcore record junkies will go directly to the second floor, which holds nothing but bin after bin after bin of vinyl, and you're usually alone. We recommend spoken-word driver education records from the 1960s. Pure bliss.