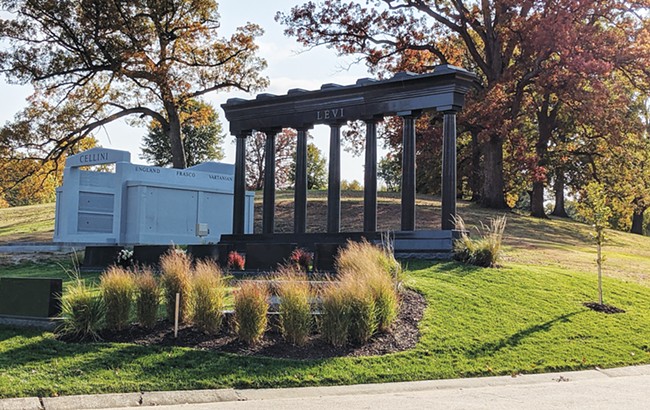 As land goes, the corner where two monuments to Springfield's biggest names have been installed since last year is prime real estate. Lashonda Fitch, cemetery director, pegs the price at $72,000 per spot, each within eyeshot of Lincoln's tomb and at one of the graveyard's most-traveled intersections. It's a safe bet that the families of Richard Levi, founder of Levi, Ray and Shoup, and William Cellini, former head of the Illinois Department of Transportation who became a political powerbroker, invested considerably more on improvements.

The Levi memorial, erected late last year, now includes remains of a son and grandson, with room for others as need arises. The black granite came from a Pennsylvania quarry, says P.J. Staab, a local funeral director who designed the colonnade structure. "Each piece, it's like a fine grain of walnut or oak," says Staab, whose family plot is nearby.

The neighboring Cellini mausoleum, installed within the past three months, has no inhabitants. A plaque denoting Cellini's status as secretary of transportation under former Gov. Richard Ogilvie is affixed to stone near what will be Cellini's final resting place.