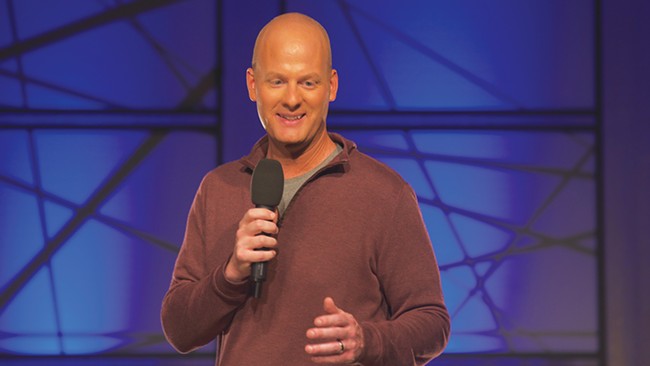 What's so funny about Jeremy Nunes, you ask? Well, with one listen to his comedy routine explaining common day mishaps and regular happenings in an interesting and provocative way, you'll get what folks heard in this aspiring comic who practices a "front porch" style of merry making.

This is the first time we've offered the comedian category in many moons, so it kind of feels like the very first time, and Nunes worked hard to get the vote out to claim his reward. Check out his Facebook page where he chastises his church's pastor for not asking their congregation to vote for him on one of his Church Complaint Sunday posts. While you're there, you can scroll through his weekly comments on subjects such as Office Complaint Monday, Small Town Complaint Wednesday, Offensive Band Name Thursday and random, revealing remarks rooted in his Southern Illinois upbringing on how family and friends feel about living in small town, rural Illinois.

Like many comedians, he's done plenty of other jobs before turning to making people laugh for a living, including a stint as a professional wrestler (he's 6'6'' tall), winning election as mayor in his hometown (it was supposed to be a joke!) and time spent in Chicago getting schooled at famed improv, comedic centers such as Second City and iO Theater (big city to small town humor).

He's recently launched a popular podcast called Dynamite Drop with fellow comedian Lee Hardin to discuss the weekly pro-wrestling program known as Dynamite and has made television appearances on "The Layover," "The Break-Up," "Last Comic Standing," Comcast on Demand and ABC's "Final Witness," plus can be heard on Sirius/XM and ESPN Radio. As with most comics, he strives to connect by working with material he understands and his community can relate to using titles such as, "Destroying Your Kid in Dodgeball," "Stop Asking Tall People This Question" and "Running for Public Office" to work with, all spots presented and filmed during his DryBar Comedy Special called Neighborhood Sasq-Watch.

Jeremy makes it a point to keep his comedy "100% clean, inoffensive and hilarious" and books plenty of shows for corporate clients and Christian events, giving credence to his patented saying, "Who's with me?" by keeping it funny with family-friendly fun.