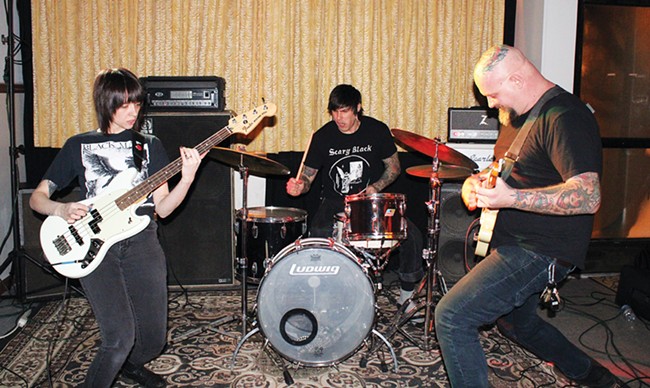 Jessica Knight-Carnes contains multitudes. When on a stage, she is a powerhouse, a short-haired spark plug of energy who sings – and sometimes borderline screams – poetic, existential lyrics. Not only is she a remarkable vocalist with a deep and dark range, she holds down the rhythm with her steady, solid bass playing. Some might find her remarkable for being a small-framed woman at the front of the band, one with a bass guitar about half the size of her, no less.

But Knight-Carnes is tired by the idea she's breaking convention by being female. She's an amazing musician. Period. And she wants others to feel empowered to play, no matter their gender or other attributes.

Looming, the band she is currently in, had its first release in 2013. Brandon, her husband, is the band's drummer, who also sings. The pair make quite the multitalented duo and the way their vocals mix is mesmerizing. Looming is likely the most visible group from Springfield's DIY (do it yourself) punk/Black Sheep Cafe/Dumb Records scene. It's also the most enduring out of a string of several bands Knight-Carnes has been in since around 2011.

She first picked up a bass at the behest of bandmates in the group Our Lady. "I started off just singing. And then my band lost their bass player ... and they were like, you can learn to play bass. You know the songs," Knight-Carnes reminisced with a laugh. "Now, I would rather call myself a bass player than a vocalist almost," she said. "I latched on to bass and it makes sense to me. And I think it's a lot of fun."

Knight-Carnes can shred, but she also knows how to appreciate gentler things. She's an anti-snob, humble to the core, and a huge fan of pop stars such as Lorde. She also loves the captivating harp playing, singing and songwriting of Joanna Newsom. Knight-Carnes said she especially appreciates those two artists "because they're characters and they're performers. I try to embody that even with playing bass; to me, it becomes a part of me and my character."

Also a millennial mom, Knight-Carnes juggles many roles. Her new endeavor, along with Brandon, is First Try Sessions, an initiative to get more guitars in the hands of young people. First Try facilitates instrument donations as well as lessons. "These small opportunities can mean everything," she said. "That's what changed things for me and a lot of people who play DIY music."