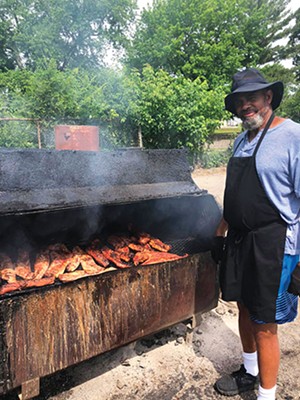 Winning best barbeque is a big deal in Springfield, so hats off to PT's. It's been serving up barbeque in various locations for over 15 years. PT's is not a sit-down restaurant but is instead a food stand where diners get everything to go. It's located in an old ice stand that PT's refashioned to fit its needs. Don't let that put you off – you would be doing yourself a disservice, as our readers have declared PT's as the best barbeque in town.

PT's puts heart into its cooking, and it shows. The menu is tight and focused – which allows PT's to focus on the barbeque and producing the best food possible for its customers. PT's smokers are located right outside the building so everyone who stops or passes by can take in the mouthwatering scents of its smoked offerings. PT's offers dinners which include two sides, sandwiches and "extras," which gives you the option to buy barbeque in bulk. The meat is nice and tender, has an appropriate smoke ring and delivers that smoked flavor that you expect in good barbeque which complements, rather than overwhelms. PT's homemade barbeque sauce has a kick of spice and it's a shame it's not bottled up and sold at the grocery store.

Dinner options include half a chicken, ribs and rib tips. Sides include baked beans, coleslaw, greens, mac n' cheese or potato salad. Try the baked beans – they taste like they have a touch of cinnamon. Whatever you order, you won't go wrong – It's all that good. Sides are offered with the dinner option and can be purchased separately as well. Sandwich options include beef, pork and chopped chicken. PT's also has smoked turkey legs and polish sausage – both of which merited comments from our readers.

Portions are good and the prices are even better – PT's is very reasonably priced for the quality it offers. Due to its popularity in Springfield, PT's can occasionally run out of things, so it's a good idea to get there early to beat the rush.

Moving to the mall

Restaurants, the courthouse and other stuff