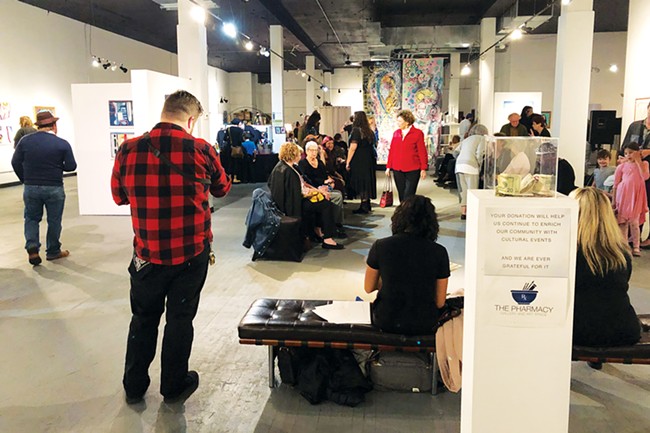 What started as a creative crew of people, many college-aged, about a decade ago, has morphed into one of Springfield's premier artistic endeavors. Andrew Woolbright co-founded the group, back when it was on the corner of Pasfield Street and South Grand Avenue in a space that used to be a drugstore. Woolbright is an acclaimed artist with a conceptual mind that questions what art is in the first place. He's since moved from Springfield to pursue his passions, but the group he created lives on.

From the beginning, The Pharmacy Gallery & Art Space has maintained a cooperative spirit. Artists can join to access studio space and participate in group showings, classes and other events. Offerings last year included a fashion show, which was well attended and included outlandish and fantastical creations from artists of various stripes, including floral artist Hannah Malone and longtime Pharmacy member Wendy Allen.

Throughout its tenure the group has had core artists while also welcoming a rotating cast of unique and creative people into the fold. There are currently 20 artists with The Pharmacy, with space for about five more, according to president Janet Sgro. Sgro first got involved with The Pharmacy in 2012 and has seen it through evolutions and various gallery spaces. "The space is fantastic," she said of the relatively new location downtown at 623 E. Adams St. "We loved the space that we had at Fifth and Cook. It was beautiful. The building was fantastic. It was a precious time for us, but we really outgrew it."

The downtown space, near Recycled Records, has been a great fit. The studio has plenty of room for artists to carve out their own work areas, with room to spare for exhibitions. The space has the feel of a big city gallery and the atmosphere to match.

While the pandemic has thrown a wrench in many of the endeavors the collective would normally take on, there was an art show earlier in the month called Transformation, an apt title given The Pharmacy's ability to morph with the needs and desires of Springfield's art scene.