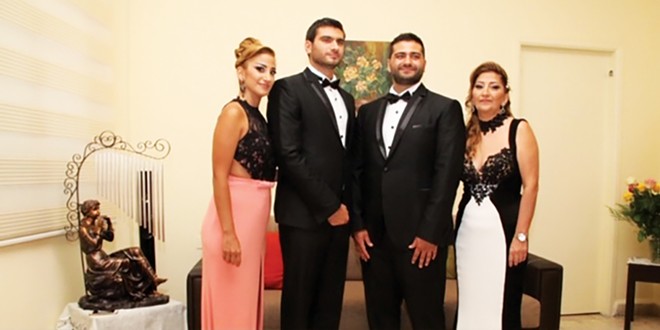 From left, siblings Nadine, Elie and Nabih Elhajj, with their mother, Zeina, in her living room in Beirut in 2015.

Nabih Elhajj is an educator and a nonprofit executive in Springfield. He was born in Lebanon and raised in Beirut.

In 1960, my grandparents moved into a fifth-floor apartment in the historic Gemmayze neighborhood, just across from Beirut's seaport. Their balcony looked onto the Mediterranean, framed by the white silos and shipping containers at the port. My mother and aunt were born there. Both received their first communions at the church next door, Saint-Antoine De Padoue. Everyone knew everyone. On Sundays, the family would walk down Rue Pasteur to church, passing by street cafes and local grocery stores. After mass, they would stop at the bakery, Patisserie Kassab, to take home manousheh (traditional flatbread with herbs), petit fours and croissants for a Sunday breakfast that whispered of the French influence on Lebanese cuisine.

When it was time for my mother, Zeina, to start her family, my grandparents gave her the apartment. And though the political maelstrom loomed outside, my sister, Nadine, brother, Elie, and I were sheltered within the walls of our home, lost in the banality and joy of daily life. We often sat on the balcony watching cruise ships dock and imagined we were ship captains. My mother would cook riz a'djej (chicken and rice) or chichbarak (yogurt and beef tortellini), which we ate as a family at our small dining table. On Saturdays, we watched kids' shows and built fortresses from the cushions of our living-room couch.

But in 2005, the situation in Lebanon was escalating. Prime Minister Rafik Hariri was assassinated, which triggered a period of violent turmoil. Like many youths in my neighborhood, I was an activist, working toward a better Lebanon. When my father deemed the risk too great, he sent me to America for a chance at a better life. Cancer took him three years later, before he could send my younger siblings or see my accomplishments. After his death, I continued my education in the U.S., while my mom raised Nadine and Elie in Beirut. I visited home and my family whenever I could. Years later, I met my wife in the U.S., and in 2015, she and her family returned with me for us to marry at our church in Beirut.

America is now my home and has afforded me opportunities I wouldn't have had in Lebanon. I am educated. I feel safe, surrounded by a loving community. But it is hard having family in Lebanon, always a powder keg. I have worried constantly about their safety. When I would voice this concern to my mother, she would say that the Virgin Mary, her patron saint, is her friend, and that if she died, she wouldn't suffer.

The morning of Aug. 4 was beautiful, so I decided to go for a bike ride in Springfield. I strapped my bike to my car and then paused to call my mother, as I have done every morning for nearly 15 years. She didn't answer. I didn't think much of it. But a few minutes later, my brother called from his office in North Beirut. He said there had been an explosion.

The same living room from the same angle after the Aug. 4 explosion that killed Zeina.

We called our sister and, after multiple attempts, she answered. She was trapped at the gym, located in our childhood school, where the walls had collapsed. She could only repeat in desperate tones, "What happened? What happened?" Shaken, she made her way out of the rubble and took off on foot. Dust hovered over the city like a thick fog, making it hard to breathe. She scrambled over the remains of decimated buildings to make her way to our mother, who was still not answering her phone. My brother was also racing to her aid.

Helpless, and far away in America, I called our neighbors, our church, our corner grocery store, our friends. No one would answer. My heart threatened to break from my chest – I could hardly breathe. I was cold, shaking, weeping uncontrollably.

Forty minutes later, my siblings arrived at the shattered building. They fought their way through the debris to climb to the remains of the fifth floor, where they found my mother lying in a pool of blood, unconscious. Together, they carried her down to the street to a Red Cross dispatch. She was rushed west to one of Beirut's remaining hospitals, where she underwent blood transfusions and eventually surgery. But it wasn't enough. She never woke up. I can only pray that she didn't suffer.

On Aug. 5, the sun rose with my despair. I had lost the most beautiful person in my life. My mother, my home and my neighborhood lay silent under heaps of rubble. The city once nicknamed "the Paris of the East," vaporized in one moment of unspeakable negligence. Its last chapter was written in blood. Twelve years ago, we said goodbye to our father. Now we say goodbye to our dear mother, "Zanzan," and to Beirut.

All the dreams of our childhood are gone. My siblings, Nadine and Elie, are now alone. My father got me out, and now I must get them out. Lebanon has denied them their basic human rights. It has robbed them of their peace, their aspirations for the future, their home, and our mother. My mission now is to bring them here to be with me, so that they may have a chance for their lives to flourish again.

Nabih Elhajj is the executive director of iVenturED, an Illinois education nonprofit in entrepreneurship. He is the lead facilitator of the Sangamon CEO program, a year-long study of entrepreneurship for high school seniors in Sangamon County. He is an adjunct instructor at University of Illinois Springfield and a first-year Ph.D. candidate at Illinois State University.