Behind the scenes at Shen Yun, a controversial practice: Falun Gong 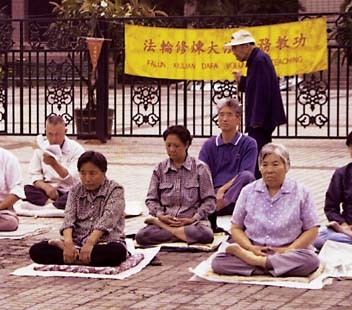 PHOTOS BY HILARY SMITH /MCT
Falun Gong practitioners meditate early one morning in June, 1999, prior to the government crackdown, in front of an art museum in Beijing, China.

Promotional flyers for Shen Yun — a multimillion-dollar stage production set for Feb. 9 at Sangamon Auditorium — are lavish, four-color photo montages of elaborately costumed dancers, whirling banners and glowing quotes from reviewers. But way down at the bottom of the back page, in tiny type, is the name of one of the show’s sponsors — Mid-USA Falun Dafa Association.

“Just this week the Chinese government forced the cancellation of seven sold-out performances of Shen Yun in Hong Kong by withdrawing the visas of the technical crew that makes the production possible. China’s government does everything it can, from politics to persecution, to discredit and ban Falun Gong.”

Falun Gong, also called Falun Dafa, is a relatively new system of mind and body energy practice based on ancient Chinese traditions of Buddhism and Daoism. It began in China in 1992 as an outgrowth of the Tai Chi fitness movement that swept China in the 1980s, filling the country’s parks with people meditating and practicing slow-moving exercises.

“It quickly became a spiritual discipline that spread across China and beyond,” Chipkar says. “That didn’t set well with the government, which insists that all religions must place their belief in the Communist Party above anything else. That, coupled with Falun Gong’s refusal to allow its fast-growing practice to be turned into a government fundraising scheme, caused the government to begin branding Falun Gong ‘anti Chinese’ and an ‘evil cult.’ ”

“By 1999 Falun Gong was appealing to China’s premier to stop the attacks on Falun Gong followers and allow them to practice in peace.

“The irony,” says Chipkar, “is that the true Chinese culture is built on belief in God, and the goal of human beings to reach enlightenment. Communism only came to China, by way of Russia, some 60 years ago. It isn’t rooted in China’s culture like Falun Gong is, yet the practitioners are subjected to persecution, torture and murder to destroy their faith.”

Chipkar, who lives in Toronto with his Chinese-born wife, was raised a Roman Catholic and became interested in Falun Gong when his mother gave him a book about it.

“My mom had always been a spiritual seeker. In fact my brothers and I used to kid her about her ever-changing spiritual flavor of the month.”

“This time it was different. A year into her practice of Falun Gong, she was different. Her relationships with all of us — my two brothers, my dad, and me — became stronger, better. Things we did that really pushed her buttons before didn’t faze her anymore. Her whole outlook was focused and happier than I could ever remember.”

Chipkar says that although the face of Falun Gong the world sees is Chinese, the practice is worldwide. Practitioners are in 40 countries and Falun Gong information is published in 27 different languages. It isn’t unusual to see Chinese practitioners congregated in public places all over the world, displaying banners and handing out printed materials that detail ways Falun Gong members claim they have been subjected to human rights violations in China.

“Falun Gong,” he says, “isn’t something that comes to people from reading a little and doing a few exercises and suddenly you’re a spiritual being floating above the air. It doesn’t work that way. Falun Gong is a spiritual discipline that features moral teachings, gentle exercises, meditation and the core values of truth, compassion and forbearance.”

“I’ve always wanted to find my own peace of mind. Falun Gong has shown me how to be compassionate — to be a better person.”

For more information about Falun Gong go to Faluninfo.net and Falundafa.org.

This Langfelder son is a New York singer

The symphony’s singer of a century