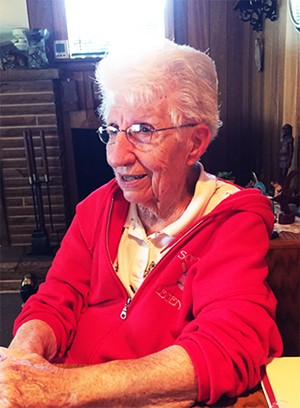 Rudy Rudolph is best known as one of the most famous female athletes ever t o come out of Springfield. I would like you to know something about the person behind that fame – a simple, sweet, honest lady who was my friend.

Born Elenore Rodolfi, "Rudy" lived a humble life growing up in Devereux Heights, among mostly other Italian and Polish immigrants.

Unless you're a Northender, you likely never heard of Devereux. At the very tip of Springfield – "the north end of the North End"– it started as a mining camp in 1902. The organizer was Harry Devereux, a future mayor of Springfield.

When Devereux coerced miners to buy lots from him in order to work in his coal mine, "Devereux Heights" fast grew into a village of about 75 humble dwellings. The only old building still standing is the Jailhouse Tavern, which used to be Fofi's Grocery Store.

I was so intrigued by Rudy's upbringing, and about others from that place, I wrote The Little Village That Could – The Untold Story of Devereux Heights, about this hidden gem (just north of Twin Lakes) and its denizens.

My interviews with her (and others who grew up in Devereux) caused us to become close friends. Maybe our close connection also stemmed from my own Italian roots. My Roscetti-Antonacci mother grew up not far from Rudy, in the tiny mining hamlet of Starnes, just north of Grandview.

Our first meeting was at the monthly Lanphier High alumni get-togethers she had with a dozen other classmates from the 1940s, at Chesapeake Seafood House.

Her friends, of course, bragged about her stellar fast-pitch softball career that spanned over 20 years. (See The State Journal-Register, Jan. 29, 2022). A catcher for Caterpillar's Dieselette's, she was their all-time leader in RBIs and triples, second in hits and doubles, third in stolen bases and at bats, and seventh in home runs. Her many accolades include being inducted into the Illinois Hall of Fame and the Springfield Hall of Fame.

But I wanted to know about Rudy's personal life. What it was like in that little village separated from Springfield by more than distance. For example, she described her home on "The Hill" (later, Angelo Street), like most of the others, as "a four-room house with a hip roof, a simple porch and, and for some reason, two doors."

Rudy's parents, Joseph and Clara Rodolfi, took advantage of the large back yard they and the other villagers enjoyed. The lots, nearly an acre, served to create an almost self-sustaining source of family food.

The Rodolfis saved up to buy another lot down the street, mostly with grapevines. Vino was the village staple. Grapevines were everywhere among that 75-acre village. Miners supplied their families, other villagers and the community at large with quality grapes. A few even supplied the Chicago mob with wine and booze in the 1920s.

Things were so tough at times that her family and others "had to take advantage of the 'relief wagon,' which . . . would go around the village and provide needy families – and there were lots of us – with free sugar and flour and foodstuff like that."

Rudy told me a story that depicts the sweet side of life in her village. A common evening ritual was bench talk among the wives. After each grueling day of meals, laundry, sewing, gardening and mothering, the women on Angelo Street found an hour of respite in front of their homes.

"So, one woman may holler to, or motion at, her neighbor friends that they should come sit with her tonight. Several could sit comfortably on the long benches in front of their houses. On another night, another woman would have her friends over at her bench. And on and on."

Rudy also waxed nostalgic when remembering one of her best times growing up. "[My friends and I] would have picnics close to where the mine had been. We called it Catchfire for some reason. It was a nice little area where we would sit around and talk and maybe bring sandwiches."

My last visit with Rudy at her cabin on Lake Peoria was bittersweet. She again talked about the book and what it had meant to her.

But she spent most of our time reminiscing about her long life. "You know, I've had a good life. No complaints. I've had a great family, many friends, a nice career at Cat and, of course, softball. I'm 93 and I'm OK. No more chemo for me."

It was her last of the ninth inning, and she finished our conversation with her big hallmark smile. We hugged and said our goodbyes.

Ken Mitchell has written and published 18 books, including the local bestselling North-End Pride: The History of Lanphier High School, Its People & Community. His books can be found at KenMitchellBooks.com or by calling 217-787-7100. He is currently working on his first novel.