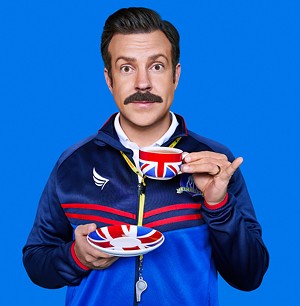 Sumptuous Knight requires patience
One of the most unique films to hit the screen in quite some time, David Lowery's The Green Knight is a dense, deliberate movie seemingly made for a very narrow audience, namely scholars of medieval literature and experts on the King Arthur legend. Be that as it may, it still proves engaging to those who need to brush up on their English history, though a degree of patience is needed.

Dev Patel is Gawain, a wanna-be Knight of the Round Table who takes up a challenge when a gigantic knight, seemingly a tree that looks like a man, allows him to smite him in Arthur's court. The young man does so with extreme prejudice, though he must fulfill the promise of meeting the knight a year hence so he might do the same. A meditation on fame, hubris and death, the film is replete with one striking visual after another, Lowery framing and holding his shots so we can drink in the Renaissance feel of it all. It takes time for Gawain to reach his destination and learn his lesson, but it's a trip well worth taking. In theaters.

Ted Lasso continues to score
In a recent interview, Jason Sudeikis compared the second season of his hit Apple TV series Ted Lasso to The Empire Strikes Back. Having seen the first eight episodes, it's easy to see why, as the series delves into more serious issues than its inaugural season. Each character finds themselves at an emotional crossroads, forced to deal with traumatic incidents from their past which they must conquer if they're to move on.

Also like Empire, father-son relationships are front-and-center as arrogant superstar Jamie Tartt (Phil Dunster) is forced to deal with his abusive dad, Roy Kent (Brett Goldstein), who steps up in his role as surrogate father to his niece. Coach Shelley (Nick Mohammed) continues to strive for approval from his dad, and as for Ted...well, a revelation about his father causes us to reevaluate the reason behind all we've seen him say and do. It sounds like heavy lifting, but it's done with a masterfully deft touch as the show's wicked sense of humor is still present, effectively providing relief to the series' dramatic moments. Rarely am I as passionate about a program as I am about Ted Lasso. The value of the catharsis it provides is incalculable. Start watching now. You'll thank me later. Streaming on Apple TV.

Malone, Schreiber nearly save Lorelei
Jena Malone and Pablo Schreiber do exceptional work in Sabrina Doyle's Lorelei, I just wish it were in service of a better movie. The two principals are Dolores and Wayland respectively, the former a single mom of three trying to make ends meet on poverty wages, the latter an ex-con, just released from prison after doing a 15-year stretch. Former high school sweethearts, they reunite with no concrete plans of staying together, that is, until Wayland gets attached to the kids and suddenly, an unshakeable bond is forged.

The film is properly gritty, the worn-down house where they live, the tattered hotel where Dolores works, the dive bar where they drink all accurate reflections of society on the fringe. However, Doyle's sense of pacing is off, the story floundering and repetitious at times, never building the sort of urgency to make the film's climax mean anything. This tale of dreams unrealized and the harsh reality the disenfranchised must deal with has its heart in the right place. Unfortunately, it loses its way far too often to have an impact. Available on Amazon Prime, Apple TV and other streaming services.