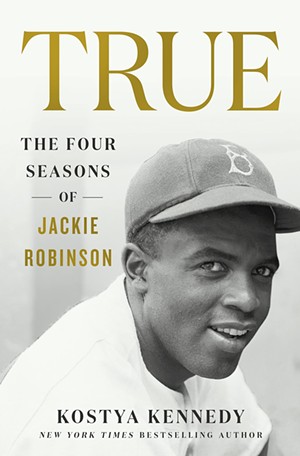 After a winter of discontent during which Major League Baseball owners locked out the players and essentially shut down the off-season activity that baseball fans know as the "hot stove" league, major league baseball has returned with a hard-charging one month spring training and a season that opens April 7.

Here in Springfield the off-season was anything but silent. Earlier this year Springfield welcomed a new team to our city, the Springfield Lucky Horseshoes. The Prospect League, a wooden-bat summer league of college players from across the country, approved the transfer of the former Springfield Sliders to a new ownership group that has vigorously promoted the new franchise. Later this year the Lucky Horseshoes will begin a 60-game season with home games at Robin Roberts Stadium.

If words can make hopes come true, this summer promises to be one of entertainment for Springfield's baseball fans. The Horseshoes are modeled after a minor league franchise known as the Savannah Bananas, a team that began playing in 2016 and sells out every game. Matching that feat in Springfield, or even coming close, would be quite an accomplishment

The seasons of Jackie Robinson

The opening of the baseball season generally coincides with the publication of baseball-themed history and biography. Baseball fans of all ages love recalling the history of the game and the players of their younger days. This season marks the 75th anniversary of the event that forever changed baseball, the rookie season of Jackie Robinson. On April 15, 1947, Robinson played his first game with the Brooklyn Dodgers. Each year, the event is marked by every player in uniform wearing Robinson's number 42 as their uniform number. Jackie Robinson's accomplishments on the baseball field as a civil rights leader and hero are unmatched. He may be the most important figure in American sports.

While Robinson's life has been chronicled in biographies and dramatic presentations, Kostya Kennedy, a sports journalist and author has added to the Robinson library with True: The Four Seasons of Jackie Robinson (St. Martin's Press, April 2022). The biography focuses on four transformative years in Robinson's life: 1946, his first season in the minor leagues; 1949, the year Robinson was voted Most Valuable Player; 1956, his final season as a player and 1972, the year of Robinson's death.

It is a remarkable story of a remarkable man. Robinson understood his place in the struggle for equal rights and fair treatment for all. He accepted the responsibility of silence in the face of racism and hate. In selecting Jackie Robinson to break the color barrier in Major League Baseball, Branch Rickey knew he needed far more than a baseball player. He needed a man who would represent a race proudly. Jackie Robinson was that man.

Kennedy recreates the important years of Robinson's career through interviews with fans, fellow players and family. Witnessing Robinson's impact on baseball is a valuable perspective. His influence did not end when he retired from the game, it intensified. Throughout this limited biography, Kennedy tells a life story in prose that qualifies as inspiring literature. No matter how much you have read or know about Jackie Robinson, True is a book to add to your collection.

Whispers of the Gods: Tales From Baseball's Golden Age, Told by the Men Who Played It, by Peter Golenbock (Roman & Littlefield, March 2022), piece to True. Seventeen different baseball players, from the post-World War II era to the 1960s, describe their careers and lives in baseball. Most include details of how they got into the game in an era where players were not measured and scouted as they are in modern baseball.

Many of the players interviewed for Golenbock's history are of special interest to those of us in Springfield because they spent part or all of their careers with the St. Louis Cardinals, Chicago Cubs or Chicago White Sox. There are enjoyable interviews with Jim Bouton and Jim Brosnan, two pitchers whose baseball accomplishments were not spectacular but who both wrote baseball diaries of their major league seasons that became iconic baseball literature. Brosnan's The Long Season and Bouton's Ball Four were ahead of their time, exposing the sordid part of the baseball life. Skeptics scoffed, but years later both Brosnan and Bouton were vindicated.

Interviews with Cardinal greats Stan Musial and Marty Marion are fascinating at several levels. Any baseball fan knows that Stan Musial was not only a great player, he was an outstanding person. He made St. Louis his home, he wore only the Cardinal uniform during his career and he was one of baseball's all-time greats. In his interview he is the same person recounting his love for the game and how grateful and blessed he was to play. While Marty Marion, a great Cardinal shortstop, was also a Cardinal hero, there are portions of his interviews that invoke some selective memory. Many of the players from the Jackie Robinson era, when interviewed about Robinson's first year with Brooklyn, seem unwilling to acknowledge that Robinson was far more than a player breaking the color barrier. They would like to believe, and perhaps they truly do believe, that Robinson was treated no differently than any other rookie. But history teaches us a far different lesson.

More than any other sport, baseball lends itself to history and literature. The great sports writers live on in the re-creation of their work and the books they have produced. As this season opens, it might be a good time to read one or two to remind of what impact the greatest game had on your life.

Stuart Shiffman of Springfield contributes frequently to Illinois Times on books and baseball.