There’s a calmness about director Barry Jenkins that belies his enthusiastic approach to his work.  Upon arriving in the lobby of the Waldorf-Astoria in Chicago, he nearly gets lost in the crowd at a coffee counter, the other patrons completely unaware of the Oscar-winner in their midst. But at soon as we sit down together and the subject turns to his work, a sense of excitement emerges that’s a delight to behold and proves infectious.

His follow-up to the Oscar-winning Moonlight, an adaptation of the James Baldwin’s 1974 novel If Beale Street Could Talk, is a moving tale of love put to the test by a false accusation and an unjust prison sentence. Named one of the best movies of the year by the American Film Institute and nominated for three Golden Globes, the film is set to rake in at least four nods when Academy Awards nominations are announced on Tuesday.  During a recent promotional stop in Chicago, I had the great pleasure to sit down with the filmmaker for a lively chat about the difficulties in making the film and the onscreen magic that resulted.

Courtesy of A24 Films.
Blah lah

Baldwin’s style presented its own special brand of difficulties where adapting it was concerned.  I asked Jenkins how he went about conveying the same sense of power from text to screen.

“The biggest challenge was, when you’re a young guy who worships this author, it becomes a very tricky negotiation,” he said. “I wanted to be very respectful of the source material and I also thought the best way to adapt the book was to make a very faithful adaptation but at a certain point, literature is not cinema and you have to take over and take authorship.  That was the first challenge.  The second challenge was like you said, he’s a very unorthodox writer, his style the literal syntax, the sentences, the structure of the narrative are very strange.  You had these two competing stories, dual narratives.  One is about the romance, the other about the systemic injustice.  And then once I understood it was almost like chemistry, where certain elements are denser than others; the systemic injustice is denser than the romance.  I realized it doesn’t have to be a 50-50 balance as far as screen time or story time.  Once I figured that out, then the adaptation, the whole process became much more fluid.”

Jenkins’ approach to the two storylines are equally passionate yet the shift between the love story and that of social injustice is abrupt, going from bliss to tragedy in the blink of an eye, a jarring transition that proves shocking and powerful. I asked him if he was concerned about losing the audience with such a sudden transition. “I think that a film audience is a very malleable audience. I think they know how to ride certain waves, like in Moonlight, going from section to section, so I felt comfortable doing it,” said the filmmaker. “Still, when these shifts happen, they have to be so clear, so definitive that there was no doubt that something has shifted. The first act of the movie is a Douglas Sirk kind of drama, where the family dynamic is really big and heightened, almost gothic. But then the second act sets up like an episode of Law & Order and it becomes a legitimate procedural drama.” 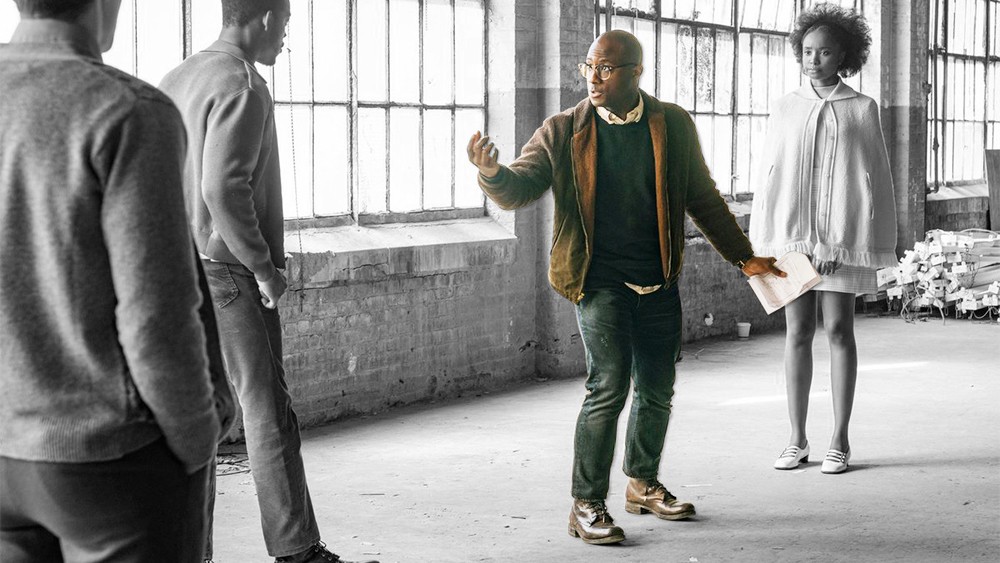 The key to any love story lies in the chemistry between the two performers that make up the couple in question.  A heartbreaking sense of intimacy exists between actors KiKi Layne and Stephan James that ultimately brings a sense of power to the film that proves poignant.  I asked Jenkins how he helped facilitate this connection.

“I’ve got to say, that’s all them,” he said with a laugh.  “They just both really understood who the characters were. What got me about the book was this idea of seeing two young black characters depicted as soulmates. If their lives were allowed to exist on this course where it’s unaffected by the outside world, they would grow to be 87 and they would have 87 babies and live happily ever after.  I think they both understood that.  It takes 20 hours to read the book, it takes 2 hours to watch the film, but I told them those 18 hours that aren’t in the film, please bring those into your character. And I think because of that, they both showed up ready to go.”

The most powerful and tender moment in the film is the sequence in which Fonny and Tish make love for the first time. Any scene of this sort is a tricky proposition and Jenkins wanted to make sure it was handled with uncommon sensitivity.

“I think it was week four of our six weeks, so by then, at some point, the actors and the crew are like family at this point. However, the problem for me was as a man I was having a problem telling the story from a woman’s perspective. How do I film this not from my gaze, but through her gaze?  I started talking to Kiki about it and I realized that Tish is always in the foreground, so we’re watching her watch and experience everything.  From there I felt like there was just enough of a remove and tenderness that on the set it felt just like them.  I cleared the set so it was just me and KiKI and Stephan and I told them, take all the time you need.  And I think something about that created this atmosphere, this environment where they really could just be delicate and tender.  Tenderness was to me what needed to rule the day.  I’m very proud of Kiki and Stephan for creating a very tender depiction of first love.”