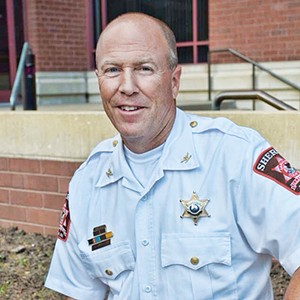 Like other sheriffs and police chiefs, Sangamon County Sheriff Jack Campbell says he's concerned at the prospect of cash bail being eliminated by the legislature.
Sangamon County is facing a potential budget hole as the state contemplates ending the cash bail system.

When someone posts bond, the county charges a 10 percent fee that goes into the county's general fund after cases are adjudicated. With $4.1 million of bonds held in 6,799 pending cases as of Dec. 31, the county stands to collect more than $400,000, although people who aren't charged with crimes within 90 days or so can get their money back, according to David Durall, chief deputy clerk in the Sangamon County circuit clerk's office.

On top of the percentage that flows through the clerk's office, the sheriff's office charges a flat $30 fee to everyone released on bond, although Sangamon County Sheriff Jack Campbell says that the money isn't collected if a person says they don't have it. "We don't hold them if they can't post it," the sheriff says.

During the past two years, the sheriff's office has collected nearly $177,000 in bond fees, including nearly $110,000 in 2019, before pandemic hit and police began issuing summonses in hopes of reducing the jail's population.

Asbell says it's not about the money: He says he'd put the fee at zero in exchange for cash bail not being eliminated. As of press time, the fate of cash bail wasn't clear as lawmakers considered a bill that would overhaul the criminal justice system. In addition to eliminating cash bail, proposed changes contained in the bill would make it easier to sue police officers for misconduct, require officers to wear body cameras, prohibit chokeholds, revise use of force standards, remove disciplinary procedures from collective bargaining for police unions and otherwise change the way police and prosecutors do business in an effort to reduce police misconduct and make the system more fair for people who can't afford bail and so stay locked up while defendants with money go free pending trial.

"The money really has nothing to do with it," Asbell said. "You never want, to use traffic citations as an example, you never want to be policing for the revenue. That's never been the intention of the sheriff's office."

The Illinois State Bar Association has praised the bill, but prosecutors outside Chicago, along with police chiefs and sheriffs, have warned that the measure will make it tougher to hold criminals accountable and protect the public.

"I'm very concerned," Campbell said. He predicted that headcount in the Sangamon County jail would initially go down if cash bail is eliminated but would eventually rise again as defendants end up back in jail for violating terms of release. "If there's no immediate penalty, police have to use additional resources to go back out and get them," he said. If defendants picked up on new charges have skipped court dates or otherwise not abided by release terms in past cases, Campbell said he believes that could be a factor in requiring bail. "I have a feeling, over time, this will all catch up if people fail to come back to court," he said.

In Peoria County, Asbell said he's concerned about people accused of misdemeanors and low-level felonies who typically aren't in jail for long stretches. Under current law, defendants receive $30 of credit toward bond for every day spent in jail – someone who is indigent and held on $300 bond, for example, now is freed after 10 days. And those days in jail, Asbell said, ultimately can help both the public and the accused.