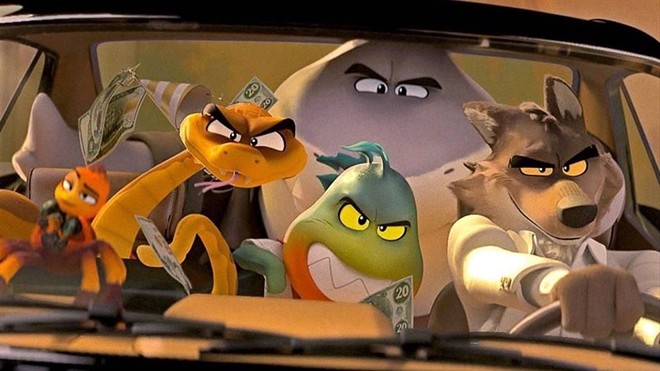 Guys wastes potential
I wish I liked The Bad Guys more than I do. The book by Aaron Blabey is a delightful take on getting past preconceptions and self-fulling prophecies. And while those elements are present, they're stifled by a manic approach that delivers headaches rather than a subtle lesson on acceptance. Wolf (voice by Sam Rockwell) is a suave bank robber whose crew – Snake (Marc Maron), Tarantula (Awkwafina), Shark (Craig Robinson) and Piranha (Anthony Ramos) – have become experts at knocking over banks or stealing rare pieces of art. Their reasoning is that people already assume the worst about them so why not confirm those beliefs and be as bad as they can?

Of course, redemption is within their reach in the form of Governor Foxington (Zazie Beetz), who believes they can be reformed if only given the chance. Under the tutelage of Professor Marmalade (Richard Ayoade) they're given the chance, leading to the film's funniest moments. It's a simple concept; too bad screenwriters Etan Cohen, Yoni Brenner and Hilary Winston complicate things with needless double-crosses, while director Pierre Perifel's hyperactive approach to the movie's too-many action scenes proves so off-putting, you'll likely turn away from the screen to avoid getting motion sickness. In theaters.


Final season of Saul off to promising start
When it was first announced, I doubt the makers behind Better Call Saul believed it would last six seasons. A prequel to Breaking Bad, one of the most successful TV series of all-time? Please. Yet here we are, seven years later, and the final chapter of how Jimmy McGill becomes Saul Goodman is upon us, devotees of the show anxious to see his final descent into corruption.

As the story resumes, the assassination attempt on drug kingpin Salamanca (Tony Dalton) failed, the would-be gunman Nacho (Michael Mando) is on the run and now Gus Fring (Giancarlo Esposito) is pulling the strings. Jimmy (the indispensable Bob Odenkirk) is caught in the middle, and trying to sabotage his former partner Howard Hamlin (Patrick Fabian) with the help of his wife, Kim (Rhea Seehorn). Yes, there are many moving parts but the pleasure in watching the show is seeing how they all ultimately mesh. Yes, I know where this is headed, but I can't wait to take this journey. Showing on AMC.


Northman bloody and cold
While the subject matter veers away from the horrific elements that have been front and center in his first two features, there's no question that The Northman is a Robert Eggers' movie. Dark in tone and look, this re-do of Hamlet through the prism of Norse mythology is a technically adept, well-acted film that comes off as an art house take on Conan the Barbarian.

This is good, as far as it goes, which is enough to get us through the 135-minute running time, though it lacks the sort of emotional engagement necessary to move rather than awe us.

Alexander Skarsgard is Amleth, the aggrieved titular character who flees his kingdom after seeing his uncle (Claes Bang) brutally slay his father (Ethan Hawke). Allowing himself to purposely be put into slavery to return to his homeland, he meets Olga (Anya Taylor-Joy) along the way, who has her own agenda, as does Amleth's mother (Nicole Kidman), who's more than a bit surprised when her son reappears. The film is a visual knockout, though be warned, it does earn its R-rating with its graphic violence. Again, it's good, but greatness eludes Eggers as he fails to provide us with an avenue to connect emotionally with any of his characters. In Theaters.