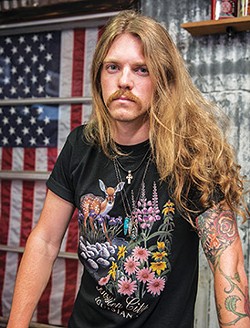 This 25-year-old songwriting, guitar-slinger native of Austin from near the Texas Hill Country (now based in College Station, Texas), surely plays beyond his years. With a prescribed presence from the classic guitar rock of the 1970s as a backdrop, his clever and thoughtful songs ring out with a true Americana rock-n-roll character. His latest record, Wave, just popped onto the scene and has already received rave reviews for powerful songwriting strengths combined with classic production values that bring the songs to a proper place with a considerate sense of time and taste. Austin’s claim of “hitting the road for a few weeks” on his Facebook page (go look and like) means two months of gigs, including several stops in the large Lone Star State, plus a couple of New Mexico spots, then on to Arkansas and Kansas with our neck of the woods at the rural New Berlin winery as his sole, truly Midwest show. This performance is happily brought to you by your friends in the Red Beard Brigade.