Sept. 10. Pops had been in bed sleeping nearly 24 hours, so Karen and I went in to try to wake him, get him up. His eyes were open and staring straight ahead. The harsh snoring sound coming out of his mouth and the barely perceptible rise and fall of his chest were the only signs he was alive.

It was so hard to accept the changes in him these past two years: face gaunt, cheeks sunken, eye sockets deep pits. He didn’t move. He didn’t acknowledge our presence.

Karen is a nurse who’s seen some pretty terrible stuff, but she was visibly shaken, it being her father and all. “Dad? Dad?” she kept asking while gently touching him. I stood next to the bed, moving one finger back and forth across in front of his eyes, hoping those still bright blue orbs would follow it. Nothing.

From out in the hallway came the happy babbling of our 18-month-old grandchild, Audri. She toddled into the bedroom in that jerky gait typical of kids her age, jabbering. The redheaded little girl’s pretty smile lit her hazel eyes with sparkling joy, bringing a tiny beacon of life into the dying room.

We’d elevated the top half of the hospital bed, so Pops was visible to Audri from where she stood at his feet.

But Audri’s spirit is so intrepid, so unrelenting, that she did not settle for being left out. Her tiny chubby fists on her tiny chubby arms gripped the shiny metal safety bed rails that kept Pops from falling or jerking himself out of bed. She started to climb.

Audri emitted tiny toddler grunts as she hoisted her body, strong little legs following, up and up. Then she balanced herself against my hip, standing barefoot on the rail, and looked down at her great-grandfather, his once robust frame now shrunken and skeletal under the thin sheets.

We had no idea what went through her little kid’s mind in that moment, but Audri abruptly lowered herself to the floor and scampered quickly out of the room.

Meanwhile, Karen had roused Pops a bit and was gently giving him tiny sips of a nutritional shake. I leaned over and took one of his bony hands in mine. Neither his eyes nor his head moved, but he gripped me back. I marveled once again how much strength he still had in spite of what the degenerative brain disease was doing to his body, spirit and mind.

Then, Audri toddled back into the room, happily jabbering in words that seemed on the verge of familiarity. In her arms she clutched Pops’ box of tissues.

Karen and I laughed as Audri tossed the box onto the sick bed and then climbed back up on the bed rails. Still chattering merrily, she pulled out a tissue and dabbed at her own mouth, just like she’d seen her great-grandpa do when he would cough up mucus.

“Give ’em to grandpa, Audri,” I said. “Look, Jim. Audri brought you your Kleenex.”

I scooted over closer to the head of the bed and encouraged Audri to move nearer. With my hand still holding Pops’, I said, “Here Audri. Put your hand on grandpa’s.”

Audri reached out and put five tiny pink fingers on the large, brown-splotched hand, next to mine.

For several minutes the three of us held hands like that.  Karen stood on the other side of the bed, slowly stroking her father’s head.

And then, I felt another presence there for those few minutes that seemed forever, a presence that stretched across time and space and held the four of us in an indescribable bond of faith, family and love.

Pops died Sept. 24, after a courageous battle with progressive supranuclear palsy. Thanks to his family and the guidance of Memorial Medical Center’s hospice program, he died with dignity in his own home. Rick Wade is a freelance writer living in Jacksonville.

A ferry for the mentally ill

Talk derby to me

Renaissance at the Art Association 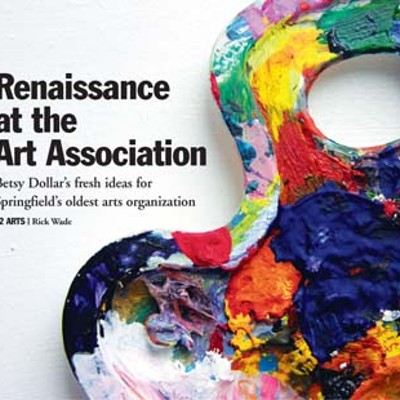