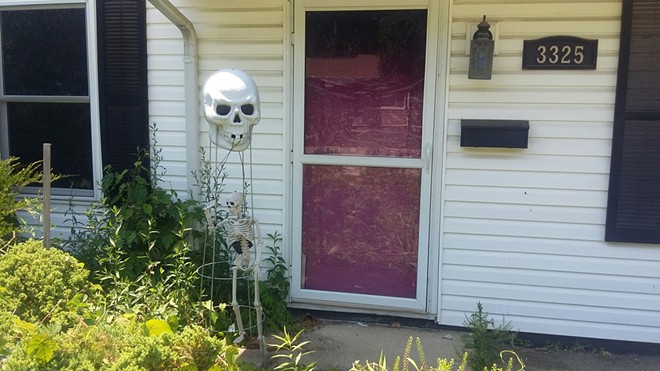 Photo by Bruce Rushton
Collins' home in Laketown, where a skull and skeleton were kept on display at the front door.

Two people were killed and one person was wounded at Bunn-O-Matic on Stevenson Drive this morning by a gunman who took his own life after leaving the scene.

The wounded woman is in critical condition this evening. The shooter, identified as Michael L. Collins Jr., 48, fled and was later found dead of a self-inflicted gunshot wound inside his vehicle in Morgan County, authorities said.

Springfield police chief Kenny Winslow told reporters at an afternoon press conference that Collins was a Bunn employee, as were his victims. The killings were accomplished with a handgun, and two handguns were found inside Collins' pickup truck. Collins had a valid Firearms Owner Identification card issued by state police, Winslow said at an evening press conference, and investigators are checking to see whether his guns were legally acquired.

Neither Winslow nor Sangamon County Coroner Jim Allmon would release victim names. Both Collins and the people he shot had reported for work this morning at Bunn.

"Today is a somber day in the history of the city of Springfield," Winslow said at the afternoon press conference.

"They told me if I saw the (suspect's) truck to give them a call real quick," said a neighbor, who asked that his name not be published.
click to enlarge

Police respond to the shooting at Bunn.

Collins kept to himself, neighbors in Laketown said. One said that he hardly ever saw him outside the house. They said they believed that his wife is a postal worker.

Grass and shrubs in the front yard of the Laketown home were overgrown. A sculpture of a skull with a skeleton hanging beneath hung next to the front door. Neighbors said a red light lit up the skull at night.

Police served search warrants at the Laketown home as well as the Collins' new residence, where officers removed a desktop computer. It isn't clear what other evidence may have been gathered. Although police don't believe anyone else is involved, Winslow said the investigation will continue in hopes of determining a motive.
click to enlarge 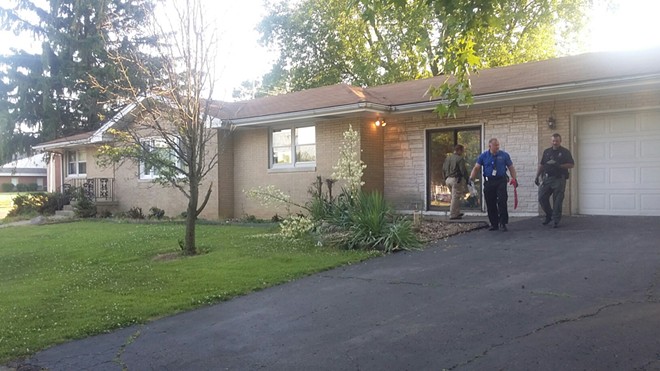 Photo by Bruce Rushton
Police search a home recently acquired by Collins, not far from his Laketown house.

"We owe that to the families, we owe that to the victims and that's exactly what we're trying to do," Winslow said during an evening press conference. "Today has been one of the roughest days of my career."

Winslow spoke Collins' name once during the evening press conference and vowed never to say it again. Instead, he referred to him as a "suspect." Collins' last contact with Springfield police was in 1991, the chief said, when he was arrested on suspicion of aggravated criminal sexual abuse and contributing to the delinquency of a minor. The Sangamon County Circuit Court online docket going back to 1981 shows no criminal charges were filed.