Arsenic, lots of it, found around CWLP%u2008ash ponds

PHOTO BY RACHEL WELLS
Waste from City Water, Light and Power's coal-burning power plant is moved across the street to ash ponds, which are being studied regarding their potential to contaminate groundwater.

Groundwater surrounding City Water, Light and Power’s coal ash ponds, located across the street from Lake Springfield, contains as much as nine times the amount of arsenic considered safe in drinking water, according to environmental testing performed in spring of 2010.

Arsenic is a semi-metal that’s been linked to cancer of the bladder, lungs and other vital organs, according to the U.S. Environmental Protection Agency.

The level of arsenic considered safe in drinking water is .01 milligrams per liter. Of eight groundwater samples taken from around the edges of CWLP’s coal ash pond and landfill in May and June of 2010, four exceeded those levels with arsenic measurements of .093, .087, .022 and .014 mg/L.

Jeff Stant is the director of the Environmental Integrity Project’s Coal Combustion Waste Initiative, which partnered with Prairie Rivers Network to publish “Illinois at risk,” a report unveiled last week that details coal ash regulatory problems. He says the measurements don’t definitively point to CWLP’s coal ash ponds as the source of the arsenic but says the results are a serious concern.

“What I can say is that those results are alarming,” Stant says. “It’s strong evidence that they’re contaminating the groundwater.” He says the utility should immediately continue sampling groundwater and, if determined that the arsenic is coming from the ash ponds, come up with a plan for cleaning up the damage.

CWLP’s regulatory affairs manager Christine Zeman emphasizes the fact that arsenic can occur naturally in groundwater. And, wherever the arsenic is coming from, Zeman says Springfield residents shouldn’t worry – the standards are for drinking water, not groundwater, the subject of last year’s testing.

“It’s not really a health concern in that respect because that’s not our drinking water. Our water is, of course, Lake Springfield, and it’s treated before it’s distributed,” Zeman says.  She says the utility is preparing to meet with the Illinois Environmental Protection Agency to discuss the test results and any next steps.

“We have no plan to remediate the groundwater here because … the level that Prairie Rivers Network is citing for our arsenic is a drinking water standard and we do not drink the groundwater that is monitored in those wells,” Zeman says.

IEPA, in its August 2011 statewide “Ash Impoundment Strategy Progress Report,” lists CWLP as a “Priority 2” facility because the groundwater near it has a low potential for being tapped for drinking water.

Even so, the IEPA is working to lower the groundwater standard from .05 to .01, to match the drinking water standard, says Rick Cobb, deputy division manager of IEPA’s division of public water supplies and manager of the bureau of water’s groundwater section. “We don’t care whether someone’s currently drinking it, we protect it for future beneficial uses,” he says.

Prairie Rivers Network’s water resources scientist Traci Barkley echoes Cobb’s concern about future use. “Future uses of underlying groundwater are unknown and should not be prevented by stoppable pollution,” she says, adding that groundwater contaminants have the potential to spread to nearby surface waters.

Any corrective action – such as putting a cover over the coal ash pond to keep rain from moving contaminants – would address any arsenic that’s leaching out, and it could also help reduce boron contaminants in a nearby stream, Cobb says. He notes that the high arsenic levels were found in groundwater on the east side of the ash pond, while boron was found on the west, right next to Sugar Creek, which is considered “impaired” by boron, a substance that limits plant growth.

Keep the Lights On 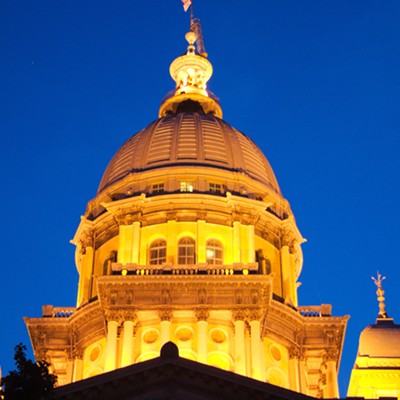 Go with the green