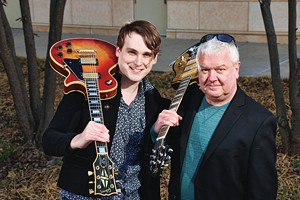 As we stroll along the boulevard of winter-spring balancing acts, music matters move along no matter whether the weather is this or that. Along with the continuous supply of local bands at different bars, some new acts come to town and musicians ask for your support.

Sven Sundberg, a recording artist from the Springfield area, recently launched a Kickstarter campaign to provide funding to make a video of his song “Seasons change.” Produced as a side project by Louis Magnotti of Warner Brothers Records and filmed by Springfield’s own Travis Cox of Red Pine Creative, the concept comes on the heels of Sven’s award-winning year in 2015. His album Intimacy: A Collection won Best Indie Instrumental Album and “Let Me Go” won Best Indie Electronica/Instrumental Song from The Akademia music organization. “It’s Time (Remix)” spent seven weeks atop on the National Indie Dance Chart, and he nearly won a few national songwriting contests. These exciting career bumps inspired Sven to make the live-action video, with filming scheduled for July 23, 2016, in Springfield. Please visit his website at http://svensundberg.com for more information, and look up his Kickstarter project to help support this worthy endeavor.

In other crowdsourcing news, Ben Bedford achieved his Kickstarter goal and is busy sending out CDs and other rewards this week to backers. Marina V and Nick Baker hit their mark to help fund a summer tour of Europe (no thanks to me, since I forgot to mention it while it was live, but you can still help out). I’m preparing to launch a campaign in early May to fund my latest collection, an 11-song album called Delicate Flower with John Stirratt of Wilco producing. Any musicians out there in need of funding for a creative project should really look into these modern ways of acquiring capital.

It’s a happy, happy birthday to guitarist extraordinaire Pat Rolens as friends, family, fans and fellow folks gather to celebrate on Saturday night at Third Base with RockHouse. The Facebook invite most succinctly states “Come out and see one of the most excellent lead guitarists in the world,” and you’d be hard pressed to get an argument on that comment. We wish the best to Pat, along with many more years of fast-fingered, melody-driven, perfectly passionate playing on guitar for us to experience and enjoy.

The Public House 29 in Rochester hosts Americana masters Square of the Roots on Saturday night with the bar open until 1 a.m. and choice food service until midnight. The music starts at 9, and bar manager Brad Hanson (yes, he from the heady Jazz Central Station days atop the mighty Hiltonian) promises more live music in the upcoming months.

Zane Williams, a cool, country singer-songwriter from Texas, plays Boondocks on Friday. All his Zaniacs will be out in force to catch this charismatic and enigmatic performer.

On a personal note, I am very privileged to perform with two of my sons this week. John Irwin, back for a bit before shoving off for a summer tour of Japan with The Young Americans, joins me at on Thursday at Dr. Ugs in Virginia from 7 to 9. At The Curve Inn on Sunday at 6 p.m., I’ve been invited to play bass with Owen & Dooley Presents. That includes Owen Irwin, my eldest son and Tom “Dooley” Woolsey, my best friend since we were 12, along with the inimitable Pat Miller on drums. Kris Bell, a Southern rockin’ blues-based, guitarist from Nashville (he played on Sunday at the Brewhaus a few years back) fronts his touring band to rock the house and close out the night.

So long until next week.