Especially in the courthouse 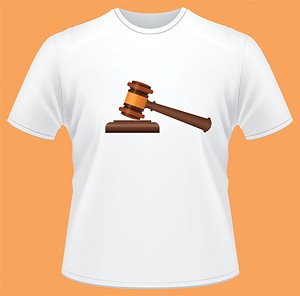 I've been accused of overdressing, and I suppose I might be guilty. After all, no one, these days, wears ties. Sneakers are considered haute cuisine or somesuch.

Twenty years back, I learned the value of dressing up during an appearance in traffic court. I was charged with many things – broken rearview mirror, no seatbelt, no insurance, cracked windshield, plus failure to signal while merging onto a freeway, which got the whole shebang started.

The tab exceeded $1,000, and I did not have much money. But I did have a suit and a tie and a cashmere topcoat I wish still fit that I'd found at a thrift store. After getting a haircut, I put it all on, plus a fedora, and went to see the judge.

I explained that I had been profiled: The car in question, your honor, was festooned with Grateful Dead stickers, and my hair was longer than it is today. I believe in profiling, ma'am, because it helps keep everyone safe. But, once the officer determined that no criminal record or warrants were in play, he should have moved on to bigger fish and... The judge interrupted. "No," she declared. "Profiling is never acceptable." Case dismissed, save for the broken mirror.

I was reminded of this when someone told me about James Auton, who recently was fined $514 by Sangamon County Associate Judge Jack Davis for misdemeanor assault. I couldn't reach Auton, but reputable sources say that he appeared in court wearing a T-shirt with a Warner Brothers logo and the words "If you see police, warn a brother."

Davis told Auton that business would not be conducted until something was done about that shirt. Auton stepped outside, I'm told, put his shirt on inside-out, and then got what he came for from the judge.

One lawyer who was in the courtroom and asked not to be identified says that Davis' actions signaled bias that should concern any defendant whose version of events differs from what police say. Also, there is Cohen v. California, decided in 1971 by the U.S. Supreme Court, which ruled that the plaintiff, who had worn a jacket emblazoned with "Fuck The Draft" in a courthouse, was wrongly convicted of disturbing the peace.

On the other hand, there is Mark Wykoff, a defense lawyer who was present and says that Davis was cool once the logo was gone. "I thought he treated him in an even more dignified manner than the norm," Wykoff says. "It sent a loud-and-clear message: When you treat the court and the process with dignity and respect, it comes back on you. I was impressed. Davis, for all practical purposes, showered the dude with love."

The judge tells me that he has a duty to ensure that everyone who enters his courtroom, from defendants to crime victims, is shown respect by everyone else.

"Simply put, I felt that the defendant's attire was not appropriate for the setting in light of those concerns," Davis said. What if someone showed up in a T-shirt saying "Crime Victims Are Crybabies?" Davis, perhaps wisely, wouldn't address that hypothetical.

Davis isn't the courthouse's first fashion maven. In 2014, Tony Libri, then circuit clerk, banned sagging pants, despite warnings from folks in the state's attorney office who mentioned free expression. Constitutional or not, folks pulled their pants up, and I can't see that anyone is worse off.

While the First Amendment is important, appearances also count. With that in mind, let's talk about Sangamon County Circuit Court Judge Gail Noll, who contributed $250 to the campaign of Sangamon County State's Attorney Dan Wright in 2019, which I stumbled across only last week.

No one should quibble if a judge gives money to a candidate for president or city council or dog catcher. It's a free country. But giving to someone who argues criminal cases in the courthouse where you preside? Would Noll wear a "Dan Wright for Prosecutor" – or "Perry Mason for Public Defender" – T-shirt in court, which is no less public than the $250 she paid to attend a Wright fundraiser?

In her defense, Noll cites a passage in the state's code of judicial conduct stating that judges are permitted to contribute to political organizations and buy tickets for political events. I haven't heard back from the state Judicial Inquiry Board, so I'll assume that Noll is as right about codes of judicial conduct as Davis is about dress codes.

In the meantime, signal turns. And consider a tie.