With such intimate, personal dramas like Crazy Heart and Out of the Furnace on his resume, a horror film would seem like an odd choice for director Scott Cooper. But there's more than meets the eye in his latest feature, Antlers, an effective chiller that gets a great deal of mileage out of the Native American legend of the Wendigo and the insecurities of its main characters.

Keri Russell and Jesse Plemons are brother and sister in an Oregon mining town that prosperity has passed by. She's a middle school teacher with a troubled student (Jeremy Thomas). He's the local sheriff who's not getting far investigating a gruesome case, as a series of dismembered bodies have been found in the nearby forest.

Effectively atmospheric, Cooper proves just as adept at generating effect thrills as he is dealing with dysfunctional family dynamics. Though touted as a horror film, this is more of a broadside of our society and the myriad of ills we're facing, all of which have contributed to conjuring up an ancient evil. The scares will shake you in the moment, but it's the all-too-real subtext that stays with you. In theaters. 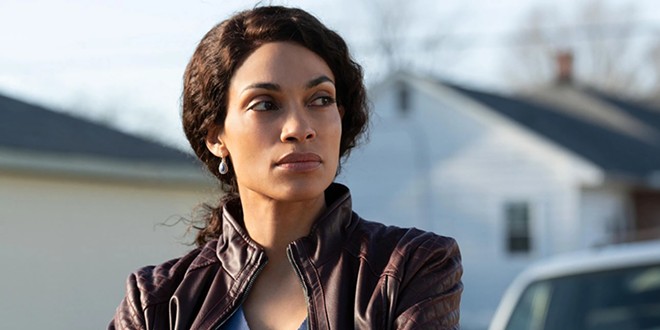 Gripping and infuriating, Danny Strong's Dopesick is a deep dive into the OxyContin abuse epidemic that's ravaged the country, approaching the event from a variety of perspectives in order to underscore its widespread nature. Based on Beth Macy's 2018 book Dopesick: Dealers, Doctors and the Drug Company that addicted America, Purdue Pharma is put in the crosshairs as the company's underhanded dealings in marketing the drug and the behind-the-scenes deals done to expediate its release are front and center in the eight-part mini-series.

Covering a span of 20 years and multiple narratives, there's no question that Strong and his crew have bitten off more than they can chew. Still, they should be commended for tackling such a complex topic, and while the changing timelines may prove frustrating at times, when the show focuses on the human toll this crisis took, it proves vital and heartbreaking. Standouts include Michael Keaton as a conflicted doctor to Appalachian coal miners, Katlyn Deaver as an injured miner who gets hooked and Rosario Dawson as a DEA agent who starts putting the pieces together while on the ground. Streaming on HULU.

Inspirational sports movies are a dime a dozen, and I fear Michael Mailer's Heart of Champions falls firmly in that category. Based on a true story - though the exact circumstances are hard to track down due to key names and places being changed in Vojin Gjaja's script – the story takes place at an Ivy League school in 1999, the home of a rowing team that's in disarray. The captain of the team, Alex (Alexander Ludwig), is as arrogant as he is rich, while new kid on the block Chris (Charles Melton) is on scholarship but hates pulling the oars. Meanwhile, a new coach, Murphy (Michael Shannon), has been brought in to pull them all together and work as a team.

It's pretty standard stuff – the crew resists their new leader's unorthodox methods until they see the light – and it's all gone through in a rote manner. Shannon brings his usual sense of intensity to the role and is, not surprisingly, the best part of the movie. Interestingly, the story takes some unexpected turns, so much so you're left wondering how much of this is fact-based and how much is invention. A documentary examining these events may have been a better approach. Video-on-Demand.