Antidotes to a toxic political culture

More women. More training. Ask once. Alcohol is no excuse. 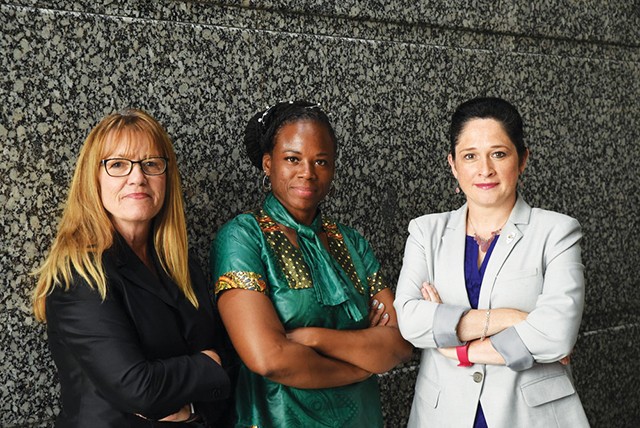 This summer, State Representative Carol Ammons, D-Urbana, State Senator Melinda Bush, D-Grayslake, and Illinois Comptroller Susana A. Mendoza – working together as the Anti-harassment, Equality and Access Panel (AHEA, a nonprofit 501(c) (4) organization) – traveled across the state on a listening tour, engaging female political candidates, campaign staffers and officeholders in conversation about their experiences of sexual harassment, inequality and barriers to access in the political arena. Last week, the group issued a report detailing its findings and recommendations based on what the report describes as “story after story about encounters in the campaign environment that made women feel uncomfortable, undervalued, disrespected, or excluded based on their gender.”

One recommendation is that the political parties themselves provide anti-harassment training to everyone who is involved in campaigns. “We recommend a system where trainings are provided to candidates and then the parties should not be allowed to provide funding for candidates who refuse to sign on to the trainings.” The report also recommends that political parties provide an independent avenue for reporting potential misconduct. “That is something that a lot of victims say is sorely lacking in Springfield and in political campaigns overall,” Mendoza said, explaining that no one knows where to go to report incidents, especially given the short-lived nature of campaigns.

The report points out that the AHEA panel does not have any investigatory powers, and therefore does not have the ability to address specific past sexual harassment cases. Instead, the hope is that the report  will make a positive impact on work environments in the future, both inside the political parties and during campaigns, which by nature are more transient and require commitment from a candidate to maintain recommended standards, rather than legal measures.

“You see what’s happening across the country,” Mendoza said, in reference to the recent Supreme Court confirmation hearings for Judge Brett Kavanaugh, “with women being believed or not believed. We’re not saying you shouldn’t drink when you’re working in a social environment like a campaign but you should not utilize the fact that you’ve had too much to drink as an excuse for inappropriate or harassing behavior.”

Mendoza expressed hope that the recommendations in the report will begin to change and curb behaviors in a way that ultimately changes the culture. “The largest part of this report is dealing with the need to elevate more women into politics,” she said. “If we want to change the culture and behaviors at the root of sexual harassment, we need to do a lot more than just expose it, we need to change it.” She maintained that the way to make these changes is by electing more women to office, who will then be establishing the new rules moving forward.

“We are recommending a simple rule for workplace romance,” said Senator Bush. “Ask someone out once and if they respond with a definitive no, you don’t ask again.” One consistent finding of the listening tour, Bush said, was that women don’t feel supported in running for office. “We need to get to 50 percent, in women representing us,” she said “That’s going to help change the culture. If there are more women at the table and more women in leadership positions, that is going to have a huge impact. This is really about women, across all parties, taking ownership.”

Mendoza expressed a feeling of déjà vu when watching the testimony of Dr. Christine Blasey Ford, bringing back long-ago memories of Anita Hill, who testified in 1991, alleging sexual harassment by Judge Clarence Thomas, now a longtime Supreme Court Justice. “We do feel, as women, that we are very much under assault,” she said. “I truly believe that the Republicans can and should do better. It’s a sad testament to where we’re at today.”

“One thing I’ve learned over this past year from the #MeToo movement,” said Bush, “is that women are going to be standing in their own space and in their own power and will be stepping up in a way that they haven’t in the past.” She is already seeing reason for hope since the report’s release last week, pointing out that Democratic Party chairman Michael J. Madigan has already sent out an email to party leaders, ongoing political campaigns and county chairs, letting them know which pieces of the report had already been enacted and announcing that the party intends to implement all of the recommendations. “I want to see all parties step up and do that,” Bush said. “We will be watching, to make sure that all of these policies are enacted. It’s time we make a difference moving forward. This culture has got to change.”

“The days of the past are over,” said Mendoza.