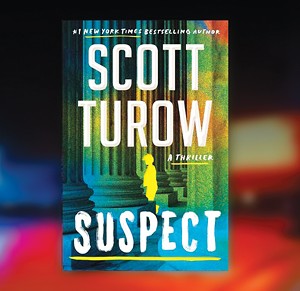 Suspect, by Scott Turow, Grand Central Publishing. September 2022.
Chicago attorney and author Scott Turow has returned to fictional Kindle County for the setting of his 15th book, Suspect. Turow's courtroom novels place him in the upper echelon of the genre along with such well-known writers as John Grisham and Michael Connelly. He and Grisham often appear together to boost their legal advocacy for the abolition of the death penalty. Turow, an Illinois product and award-winning writer, has returned to familiar territory in his most recent offering.

Suspect reintroduces readers to Clarice "Pinky" Granum, a private investigator who first appeared in The Last Trial, published in 2020. Some back story is required, although no spoilers are present. "Pinky" is the granddaughter of Alejandro "Sandy" Stern, the urbane, Argentinian-born attorney who plays a prominent role in many Turow novels. After failing to complete training as a police officer, she began a career as a private investigator. Her grandfather is now retired and living in an assisted living facility, but he does make a few appearances in Suspect. "Pinky" has a new boss, Rik Dudek, an attorney who in almost every respect is the opposite of her grandfather. Where Sandy Stern took on high-profile cases with polish and style, Dudek scrambles for clients charged with less serious crimes, as well as minor civil matters. But a major case has come to Dudek, and he and "Pinky" find themselves breaking into the legal big leagues.

Turow's legal-themed novels often take on current legal issues. In Suspect, readers will find themselves in the center of a reverse me-too accusation. Lucia Gomez is the police chief in the city of Highland Isle, a community in Kindle County. Her career has produced a spotless record, culminating in her appointment as the first female chief in department history. But now she finds herself defending accusations from three male officers that allege she solicited sex in exchange for promotions. Chief Gomez believes that she is the victim of a plot by people outside the department to end her career. She has turned to Dudek, a longtime friend, whom she trusts to represent her in a federal investigation and a civil service complaint that could end her career.

Who is responsible for putting Gomez in the frame? Her defense believes that Moritz Vojczek, known to most in Kindle County as "The Ritz," is behind to effort to get Gomez out. Vojczek is a former high-ranking police officer with a shady reputation when he was on the police force. After her appointment as chief, Gomez demanded his resignation. As Turow parses out the history between "The Ritz" and the Chief, both clearly have strong motives to bring the other down. The battle between the two takes place on the streets and in law enforcement agencies. At the same time the battle for Gomez's job takes place not in a traditional courtroom but in an administrative hearing. Regardless, the legal proceedings of Turow's novel are completely up to his standards. Turow spent substantial portions of his legal career as a trial attorney and he uses that experience to write compelling and forceful courtroom scenes. They are always the finest portion of his novels.

While the Gomez hearing is an administrative matter, for the attorneys it is still the same as a courtroom contest. There is preparation and anticipation as well as the never-ending battle between attorneys where the rules of procedure are viewed more as suggestions. Turow is skilled in his courtroom scenes and, while remaining true to the less structured administrative hearing process, the attorneys play by the rules learned in court. As Rik observes, "it is hard to cross-examine a cop. They are used to testifying and, to put it bluntly, good at lying when they have to." In the Gomez case both sides have strengths and weaknesses in their cases. Unlike a trial, there is not the same ebb and flow, because the hearing stretches out over several evenings. As a plot for Suspect, it works well because one night a week on the pages of Turow's novel, witnesses are testifying in the Gomez matter, while at the same time "Pinky" is looking to uncover evidence against "The Ritz."

This is a different Turow novel. It's not the courtroom where the denouement occurs but out on the street, as law enforcement is working to gather evidence. It's not the lawyers, judge or jury who bring the story to conclusion, it's the local police and FBI. In any respect, Suspect is an interesting and thoughtful novel by a keen observer of the legal system.

Stuart Shiffman is an associate circuit judge in Springfield. He is a member of the American Bar Association Gavel Awards Committee, Scribes — The American Society of Writers on Legal Subjects, and a frequent contributor to Judicature Magazine and Bookreporter.com.
Read More about Stuart Shiffman