Coronavirus or no, court continues 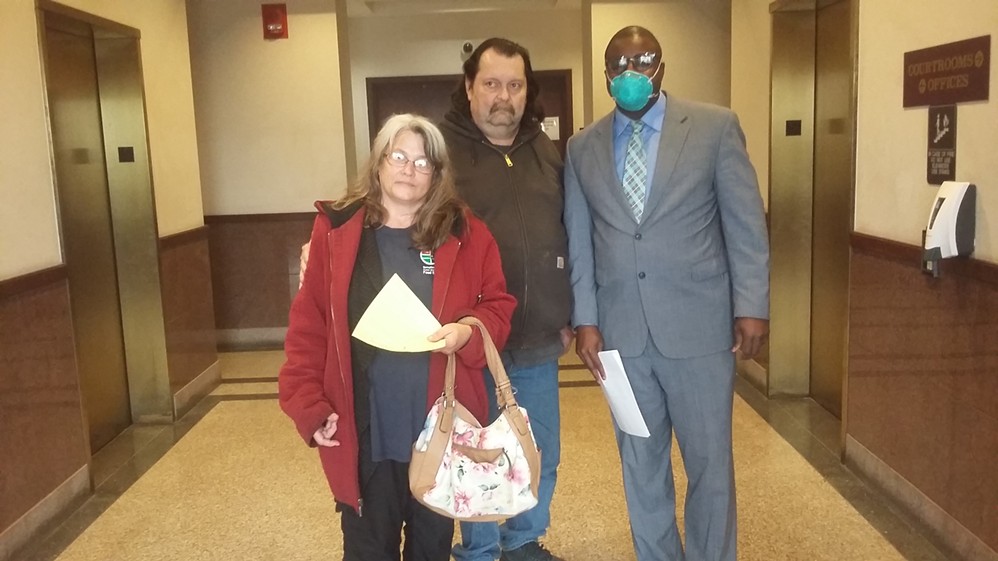 Photo by Bruce Rushton
Rick and Carla Phelan with their lawyer Dowin Coffy.
There are not many folks in the local courthouse these days, where crimes of fashion lately run rampant.

Assistant state’s attorney Brian Shaw looks like he slept in the shirt and khakis he wears during Friday proceedings before Sangamon County Circuit Court Judge John “Mo” Madonia. The judge, who needs a shave, wears a robe, but no tie: You can see the crewneck of his white undershirt worn beneath a pink shirt. Who needs buttons at a time like this? Defense attorney Scott Hanken rocks jeans and a shirt with sublimated camouflage motif.

Can I take a picture? Madonia prefers not. I can’t recall how many hours I’ve spent in courtrooms over the years. I can remember exactly how many times I’ve been offered coffee by a prosecutor during a pause in proceedings.

No thanks, I tell Shaw. I mention wrinkles. “Wash-and-wear justice,” he cracks. Defendants wear stripes and sanitizer, each prisoner rubbing plenty on his hands when he enters the courtroom. Madonia notices that two lawyers are sitting in the spectator section behind the defense table, along with me. There appears to be six feet between us, but there could be more.

“We have three people on one side of the courtroom,” Madonia loudly observes. I move behind the prosecutors’ table. “No offense, gentlemen, thank you very much.”

This is justice in the age of coronavirus. The courthouse closes at noon and is largely closed to visitors – if you have business, call ahead, and expect to have your temperature taken at the door. Cases involving defendants not in custody are on hold, and Madonia has taken over the criminal docket – he wants as few people in the building as possible, so other judges are staying home. Except for emergencies, the civil docket is at a near standstill.

The judge isn’t fussy about the order of cases. “Whatever you work out, I don’t care,” Madonia tells lawyers. “Get people in front of me.” In 90 minutes, he sentences someone to 10 years and handles preliminary hearings for three defendants seeking proof that cops had sufficient reason to arrest them. One starts saying something, but doesn’t finish the first sentence.

“You heard the same evidence I did: There is probable cause — in fact, there is overwhelming probable cause — to believe that you struck that woman who was obviously pregnant,” Madonia tells the man, who remains silent as he is led back to jail.

Madonia, like presiding judges elsewhere, has issued an order covering everything from filing procedures to check-ins with probation officers to sanitation. All door handles and elevator controls must be sanitized twice daily, flat surfaces in bathrooms must be regularly disinfected. Appearances waived for anyone with flu-like symptoms. Orders for protection will be issued and cases involving detention or shelter for juveniles will proceed, along with emergency family matters. Petitions to quash automatic suspension of driver’s licenses for DUI suspects would be processed and scheduled “as is normal and customary,” which typically takes awhile.

Without being specific, Madonia says he wishes that he would have talked more with others who work in the courthouse when he issued orders changing the way that business is done. “My focus is on the courts, but there are other functions in the courthouse,” he says. “I just wish I would have communicated better. There’s all kinds of nuances.” He also faults himself for not pushing earlier for a better videoconferencing system so that defense attorneys can more easily communicate with the accused in jail. “Had I pushed harder and gotten this done before this happened, we would have so much better communication between lawyers and their clients.”

The judge says he’s keeping a journal, writing emails to himself noting improvements that should be accomplished when crisis ebbs. Eventually, he promises, there will be lemonade. He frets over mental health court, a diversion program aimed at keeping mentally ill defendants out of jail. Madonia long has presided, delivering lectures and atta-boys and deciding fates, but the face-to-face, at least for now, is over. He’s counting on social workers and lawyers to ride herd. “I’m worried,” he says. “I’m relying on boots on the ground.”
Some things can’t wait.

While Madonia plows the criminal docket, Associate Judge Dwayne Gab in a courtroom two floors below holds an emergency hearing on a request for a restraining order filed by Rick and Carla Phelan, who were left homeless after a motel owner called police when they couldn’t come up with rent. They’ve slept the last two nights in their car. 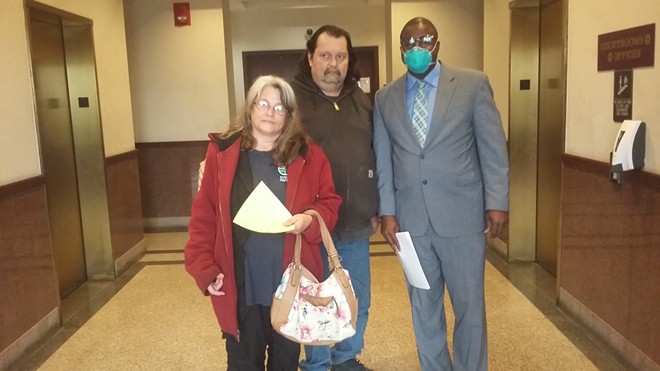 Photo by Bruce Rushton
Rick and Carla Phelan with their lawyer Dowin Coffy.

“There are homeless shelters in Springfield that can provide shelter the plaintiffs are in need of,” argues an attorney for the hotel owner, who posits that the Phelans left voluntarily. Not so, counters Dowin Coffy, a legal aid attorney who represents the Phelans with a surgical mask dangling around his neck: The cops threatened them with jail if they didn’t depart, and that’s no choice at all. Also, he says, Rick Phelan suffered a stroke years ago, and that puts him at high risk should he be infected with the coronavirus.

Gab sides with the Phelans. Under the statewide stay-at-home order, the hotel, at least for now, is their home, the judge decides, and that’s where they will stay. Did they get justice, I ask Coffy in the corridor? Yes, he answers, they did.

Coffy had told the judge that the legal department had told him that cops who’d threatened the Phelans with jail were in error. I contacted Jim Zerkle, corporation counsel, who told me that he hadn’t heard of the case. On Tuesday, Mayor Jim Langfelder issued an order. “(T)he Springfield Police Department will no longer be assisting in the removal of persons who fail, refuse or have the inability to pay for services that the residential premises may provide, including hotels and motels,” a press release said.