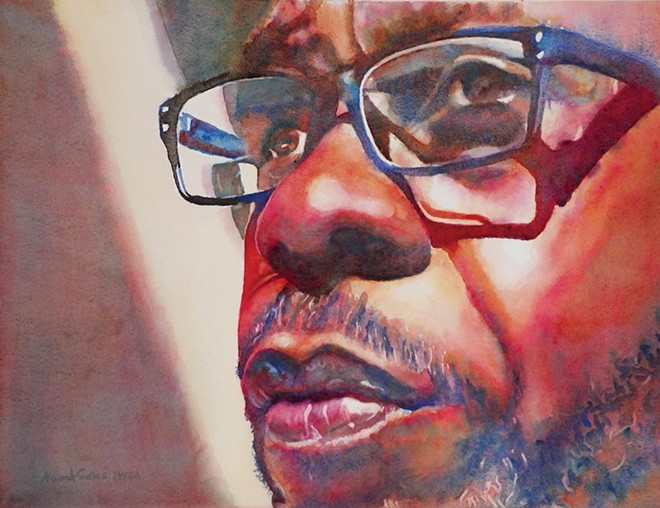 Painting by Aneita Gates
A painting of Keith Battles by Aneita Gates, which was shown earlier this year at Springfield Art Association for an exhibit titled Facing Homelessness.

In January, when Helping Hands of Springfield and the Springfield Art Association teamed up to shine a light on those experiencing homelessness, no one could have anticipated the lasting impact.

Erica Smith is the social service organization's director. She said the project was aimed at adding a level of humanity often missing from conversations about social problems such as poverty and housing insecurity. "When you really get to know the people and you get inside the issue, you see that it's complex."

That was the experience of Aneita Gates, a Petersburg watercolor artist who was part of the project. She was paired with Keith Battles, who grew up in Chicago and was incarcerated multiple times for offenses related to drug use and burglary, before landing in Springfield and experiencing homelessness. Gates is a retired graphic designer. Battles is in his mid-50s and recently moved into an apartment in Enos Park for which Gates has helped Battles pay rent. He's looking for a stable job, and has found some maintenance work for now.

Battles had many obstacles in the way of his success starting young. His dad was a heroin addict who died from an overdose. Battles is a former gang member and struggles with addiction himself. He's started a new life in Springfield, after being under the care of Helping Hands. "I have a year and five months clean. I have an apartment, I'm working ... I go to church," said Battles of his current life. This is the first time he's ever lived in his own apartment. His goal is to reconnect with his son who lives in Oklahoma.

The sobriety is a hard-fought accomplishment. Gates has attended recovery meetings with Battles, which he attends on a regular basis. She said getting to know him better has been like peering into a window to another world. "They weren't the people that I would be hanging out with," she said of the recovery meetings. "I live out in the country and do my paintings and paint with other senior citizens."

But Gates is now part of Battles' support network, which also includes an SIU caseworker. When Battles first met Gates at the Helping Hands shelter, he couldn't believe someone would want to use him as a subject for artwork. "When I saw my picture, I was amazed," he said. He now has a copy hanging in his apartment.

With the pandemic, Gates and Battles haven't seen each other in person in months. They both hope Battles will find his way to stability and self-sufficiency. Gates believes she was introduced to Battles for a higher purpose. "I'm an agnostic. I'm not super-religious," she said. "But I felt God's leading me here."

Smith said the project's success was a welcome surprise. "The project was two years in the making, and we really didn't know what to expect." Smith hadn't known it would lead to a widely acclaimed art show and exhibit. As the city of Springfield continues to search for housing solutions, Smith said bridging some divides in understanding through art has been a meaningful endeavor.

She said she wanted Helping Hands clients "to be seen for the incredible individuals they are, the community members that they are, not just this one descriptor that only applies to one part of their life."

"Being homeless isn't someone's life. It's something that's happening to them," said Smith.