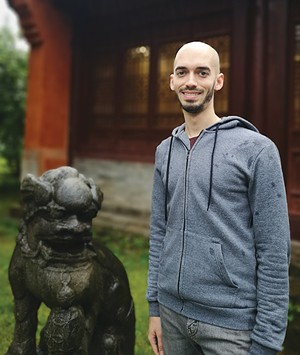 Tom Funfsinn lived in Springfield as a student at UIS.

The cultural, ideological, and historical disparities between the U.S. and China are vast. This East-West chasm attracted the attention of Columbia, Illinois, native and former Springfield resident Tom Funfsinn during his time as an undergraduate and graduate student at the University of Illinois Springfield from 2008 to 2015. Funfsinn's resulting fascination with East Asia culture led him to ponder the possibility of studying and living abroad to gain a better understanding of his homeland.

This intrigue eventually drew the Illinois native to settle in China in October of 2015, with the intent of challenging his perceptions of life in the U.S. and testing his mettle in a foreign land. But Funfsinn never anticipated experiencing a three-month quarantine only 700 miles from ground zero of the world's worst pandemic in over 100 years.

In his first stint, Funfsinn taught English at a vocational and technical college in Puyang, China, a rural city with few foreigners. After two years, Funfsinn moved to Shanghai, the world's third-largest city, at over 23 million. While there he taught English at a public high school for a year, and then relocated to the capital, Beijing, where he currently works at an international private school teaching written English to students who will apply to U.S. universities.

While Covid-19 was not a major health concern in China until late January, Funfsinn began to see the writing on the wall earlier in the month. "I had my finger on the pulse of it back in early January, having read updates from the U.S. Embassy regarding minor warnings of a potential virus in Wuhan," he said. Funfsinn and his fiancee had previously planned to visit her family in rural Hubei province (where Wuhan is located) during the national Chinese holiday of Spring Festival, which he describes as "Christmas and Thanksgiving rolled into one and shot up on steroids." But the day before their departure, amid word-of-mouth and social media news of a viral emergence in Wuhan, they canceled their vacation plans. The next day the government issued a stringent, two-month lockdown of Wuhan, the epicenter of the COVID-19 outbreak.

During the height of the Chinese outbreak, which lasted from late January to late March, Funfsinn's Beijing highrise apartment community was restricted to only one entry/exit gate. For roughly three months, he self-quarantined in his apartment, only leaving to obtain essential supplies within a two-block radius. Passes were given to enter and exit the premises, during which temperature checks were administered and identification checks were performed for contact-tracing purposes. An app-based color code system was also used to determine potential exposure to COVID-19, and ultimately aided in minimizing government restrictions.

Funfsinn noted how the Chinese are attuned to health hazards such as air pollution and the SARS outbreak in the early 2000s, so wearing masks was common even before the arrival of COVID-19. "Beijing was one of the cities hit with SARS and so a lot of people here had a natural, informal, and social response instead of being told by the government," he says. Eventually, temperature checks became mandatory in crowded public places such as malls, supermarkets and transportation hubs. Small, nonessential establishments such as shops, barber shops, bars, and restaurants were closed for the duration of the lockdown. Around the beginning of April, restrictions were incrementally loosened as infection rates decreased.

Cabin fever was a nagging problem during Funfsinn's three months of virtual hibernation in his small apartment but being a self-described "homebody" eased the tedium. During this time, he improved his piano-playing skills, read often, began writing a blog and indulged "in a whole lot of binge-watching...and a whole lot of video games" to keep the monotony at bay.

Life in China has illuminated Funfsinn's perspective on the attitudes of Americans. He has noticed a resilience among the Chinese regarding health crises that is not familiar to Americans. "Here people dealt with pandemics before, especially in Beijing, and they know, culturally, its seriousness, but that hadn't been the case in 100 years in America. Here taking practical health precautions and wearing PPE are more a civic duty and less a political proclamation." China's confirmed cases of Covid-19 are significantly lower than those of the U.S., which leads the world in infections (7.3 million) and deaths (207,000).

Andrew Leonard of Springfield has a voracious appetite for current events and enjoys writing about foreign policy and international politics.

By American Institute of Architects

When police kill a child, all of us bear the shame