All the Midwest’s a Stage

St. Louis author will sign books in Springfield on May 18 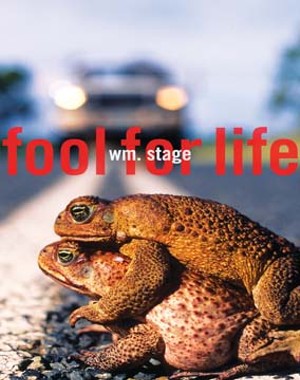 William Stage
If you were to stop four random strangers on a St. Louis street and ask for their opinion of William Stage’s book Fool for Life (Floppinfish) the question might elicit the following responses:

You’d of course have to assume that a significant portion of people walking around the Gateway City on a given day had read the book or had heard of Stage, whose person-on-the-street column appeared in Riverfront Times until Web 2.0 came along and enabled people to publish their own aimless rantings.

But the point is that this “fictionalized memoir,” for which the author enlists the assistance of his neurotic adoptive mother to track down his natural family, is a sort of literary inkblot test for the reader.

If you’re looking for a tale to warm the heart you’ll find it in one of several moments contained in the letters Stage exchanges with his birth mother, who gave him up for adoption after getting into trouble, as her condition was described in those days, at age 19.

“How do I sum up 50 years? I’ve been told I’m good with words so you’d think it would be easy. It isn’t,” he writes to her in 2001. “I have often thought about what you, my dad, and any siblings might be like. Would you/they be impetuous, curious, stubborn, funny and tenacious like me?”

According to her William, Virginia Stage’s motivation for helping William find his natural family was to provide some clarity as to why he is the way he is — specifically, belligerent and resistant to discipline. In addition to getting into the occasional scrape with the law, Stage writes rather honestly about his numerous romantic dalliances, which he has enshrined in The List.

“I never thought of my list as an exercise in egotism or an impersonal record of sexual conquests,” he writes. “I simply wanted to remember these lovers because sometimes all you need is a name to prompt the memory.”

Of his many affairs, the steamiest and most tumultuous is by far the one Stage has with the city of St. Louis. Stage makes part of his living as a process server earning 35 bucks a pop delivering court summonses in what is perennially one of America’s most violent cities.

Between his sleuthing between St. Louis and southwestern Michigan in search of his roots he takes us on mini-adventures from the North Side to The Hill and from Lafayette Square to Dogtown. He even gives a shout out to Springfield.

It’s hard to know exactly what about his life is embellished in the book and what isn’t. Stage also claims to have been called to active duty during Operation Desert Storm, to have taught photojournalism and feature writing, and to have written several other books.

Where do we go from here?