Patriotism is a hard thing to convey on the screen. One degree too much in either direction, and your film can come off as overtly political or insincere. Boaz Yakin's Max makes no bones about its intent — it's an enthusiastic flag-waver from the very first frame, a shameless tribute to our boys serving on foreign soil and the faithful dogs who help them root out insurgents and their weapons. While I have no problem with sincere praise being delivered to those who serve, what I can't abide is when a sloppily written, lazy exercise in family bonding is attached to it. Such is the case with Max, a film I fear will find great success at the box office because of its intent rather than its content.

The film begins with a routine sweep of a village in Khandahar. Straight-as-an-arrow Sgt. Kyle Wincott (Robbie Amell) and his unit are on the lookout for a major cache of weapons, and with the help of his faithful service dog Max, they uncover a mother lode of arms. All seems well until it's found that some of the guns they found have gone missing. It's suspected that Kyle's best buddy Tyler (Luke Kleintank), who happens to be in his unit as well, may have something to do with this, and when he questions him about it, Kyle is conveniently killed in action.

This proves devastating to his parents Ray and Pam (Thomas Haden Church and Lauren Graham) and, though he refuses to show it, his younger brother Justin (Josh Wiggins). In addition to Kyle's belongings being brought home, so is Max, who is suffering from PTSD. Reluctantly, Ray takes in the dog and puts Justin in charge of him, something the petulant teen resents from the start. However, a bond soon grows between the two outsiders, which comes in handy when Tyler comes home, obviously up to no good. 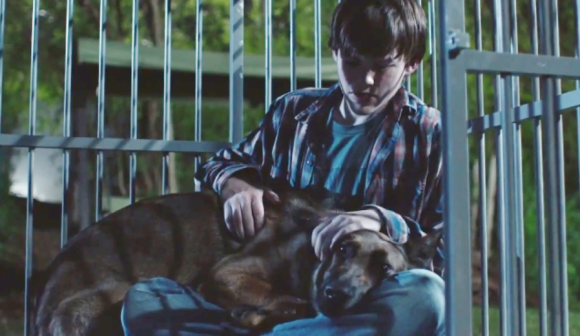 Unanswered questions abound in the script by Sheldon Lettich and Yakin, who must have been hoping viewers would be blinded so much by the film's patriotic bent that they wouldn't notice the incredible amount of stupidity at play in driving the plot forward. Tyler is selling arms to a Mexican drug cartel, and how he managed to smuggle arms from Afghanistan to Texas is never questioned. Neither is the fact that Max seems to be a really super dog. I don't have any doubt that canines can track a scent for many miles, but I have a few questions about his being able to continue his search over a large body of water. Correct me if I'm wrong, but I thought rivers, ponds and lakes were major scent killers.

Lapses in logic abound in the film's third act, so many that it would take more column inches than I have to list them. My favorite, however, is when Justin, tracking drug dealers and lost in the woods, sends his girlfriend Carmen (Mia Xitlali) off to call the police, only to have his buddy Chuy's (Dejon LaQuake) cellphone ring in the very next scene. Groan-inducing coincidences and convenient circumstances are employed ad nauseum during the movie's hard-to-swallow conclusion in which Max saves the day, despite incessant bumbling from the humans who love him.

Courtesy Warner Bros.
Justin (Josh Wiggins), his father (Thomas Haden Church) and Max get in over their heads in "Max."

If the movie has a bright spot, it's Wiggins, a young actor in only his second feature who has the unenviable task of taking a truly unlikable character and convincing us that he can genuinely change for the better. The kid pulls it off with a sense of strength that's impressive, never resorting to obvious emotional responses, internalizing much of what Justin is feeling, giving us occasional glimpses of his progression. Wiggins is one to watch, and I'm eager to see what he does next.

While Yakin's intent with Max is honorable, the story that serves as its foundation is not simply flawed but ridiculous. In the end, he takes the viewer's goodwill and intelligence for granted, leaving us feeling manipulated rather than moved. Needless to say, service dogs like Max and their handlers deserve much better.