Banks is first Black trans woman to win a public school board seat in U.S. 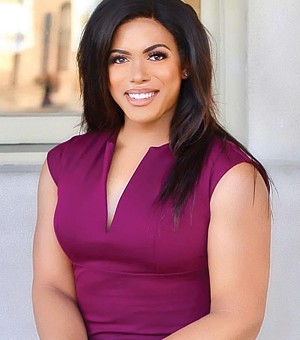 photo courtesy facebook.com/alanafor61
Alana Banks
"We are extremely proud of Alana Giselle Banks' historic electoral victory for the Decatur Public Schools District 61 Board of Education," said Brian Johnson of Equality Illinois in a statement after her win on Tuesday, April 6. Banks is believed to be the first Black transgender woman who will serve on a public school board in the U.S. LGBTQ civil rights supporters hope her win will help inspire others to run for public office.

Banks owns a paralegal support firm and also works for a transgender health care company. News of her historic win has been covered across the country. She spoke with Illinois Times for the following interview, which has been edited and condensed for clarity and length.

You're only 25 years old, but you have many years of activism and policy experience. Can you tell us about how and why you first got involved?

During my younger years I struggled a lot with academics. Getting into extra-curricular activities like student government was something that kept my attention in school. It helped me overcome obstacles with learning disabilities and behavioral issues.

Before that, I had spent a lot of time suspended. I had skipped around to several different schools, so by the time I was in high school, I felt unprepared. When I was 15, the superintendent at the time, Gloria Davis, recruited me to join her Superintendent's Youth Advisory Council at Eisenhower High School in Decatur. That was my first involvement in district affairs.

I struggled with my sexuality in high school. I was outed by an administrator to my parents, and that changed the course of my life. Since then, I became an advocate for LGBTQ+ issues. I started researching organizations like the Human Rights Campaign.

Fast forward, I graduated high school and I was identifying as a gay male. I didn't transition until I was 22, when I was at Morehouse College in Atlanta, Georgia. That was when I started to become myself. I got an internship with the U.S. Department of the Interior, where I helped work on LGBTQ+ policies for federal employees. In addition, I've lived in Los Angeles, New York and Chicago. I wanted to bring that experience, knowledge and information back to my community.

What has your experience been, being openly transgender in Decatur, and what does this win signify in terms of representation?

This area is part urban, part rural. The mindset is still often what you might expect in a rural area. And so after transitioning, a lot of people I respected lost respect for me. It was very tough. I had to leave Decatur to start my transition. And it wasn't until I felt more comfortable and confident in my decision to transition that I decided to move back.

I think my win is good for our community because people can see that no matter who you are or your background, we all have the same goal – to better our community. A lot of people around here are uneducated about queer issues.

In addition to this being a win for the LGBTQ+ community at large, it's also good for trans people of color. Generally, in the media, we're not represented well. I'm glad to know that I could be a vessel of positive change, it's not just about me.

Can you tell us about the Pride Project you created for Decatur Public Schools District 61?

That was released about a year ago. It was a collaborative effort with others and we picked different policies that had worked for other school districts in the country. I presented and submitted the plan to the Decatur public school district for review.

It was created with the goal to inform the district about trans and gender-nonconforming students and has ways to protect them from issues like bullying. It outlines various ways the district can make a difference when it comes to LGBTQ+ inclusion. We were fairly successful in getting it out there and recognized by the public. But it ended up not getting passed by the current board members. So that's first on my to-do list.

You've talked about the importance of getting kids back in the classroom, but also creating a permanent e-learning option. Can you summarize your goals for that?

There are students who are like I was. They may have learning disabilities or behavioral issues, and e-learning can help them. There are also students who suffer from chronic illnesses who benefit from remote learning. This could also impact our dropout rate. Instead of suspending or expelling students and them dropping out, we could offer this option of continuing education at home.

What else do you want people to know about this historic win?

I have been getting so much news coverage, but I want to acknowledge that there is another LGBTQ+ person who also won a seat on the Decatur school board in this election – that is Kevin Collins-Brown, who is openly gay. Before us, as far as I know, we've never seen openly queer people represented here in Decatur. And I'm going to be the only African American serving on the school board. There's a lot of pressure, but I'm very excited to get started. And I hope I can make my community proud.