Travel with the president-elect on board the train to Washington, a journey to destiny 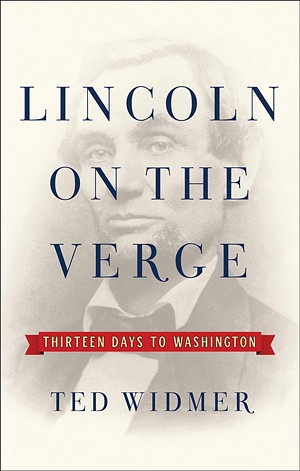 On Feb. 11, 1861, when Abraham Lincoln stepped onto the train in Springfield for what would be a 13-day journey to the nation's capital, America was "on the verge of a precipice," as a French visitor observed. Ted Widmer tells the story of the grueling and dangerous journey in his masterful book, Lincoln on the Verge. The phrase, "on the verge," in the title gives a perfect description. The United States was on the verge of secession; in fact, South Carolina had already seceded in December, only a month after Lincoln had been elected. The government was on the verge of collapse due to widespread corruption. Washington, D.C., was on the verge of halting construction on the Capitol, Washington's Monument and the paving of rutted streets. Lincoln was on the verge of danger due to threats of violence against him by many who did not want him to be president.

Widmer expertly weaves the story of Lincoln's election, the four months between the election and the inauguration, and the many experiences along the journey, making readers feel they are on board the train as it weaves a meandering 1,900-mile route from Springfield to Washington.

On Nov. 6, 1860, Springfield's telegraph office on the north side of the square "click-clicked" the incoming messages of Lincoln's victory from across the country (he lost Sangamon County and only won Springfield by 73 votes). Reaction was swift. "Unthinkable," claimed author Nathaniel Hawthorne, who wondered how Lincoln found a way "to fling his lank personality into the chair of state." That was mild compared to the hate mail Lincoln received and the cruel cartoons published in newspapers. (Examples are on display at the Abraham Lincoln Presidential Library and Museum.) Yet, Springfield was called a "mecca," due to the throngs of people who came to see the newly elected president.

Widmer devotes over 100 pages to the election and aftermath, the state of a disintegrating government and the pending secession, all before he begins the story of the train journey.

Thousands of people lined the train's route and crowded into stations awaiting the Presidential Special (inauguration train). At the many stops, Lincoln gave short speeches from the back of the train or alighted to shake hands. Each night the train stopped at a larger city where the entourage would be housed at a local hotel. Crushing crowds followed Lincoln. In Cincinnati there were so many people that an observer said the city was "on the verge of pandemonium."

It was a grueling schedule and, after only a few days, Lincoln's hands ached from the many handshakes and his voice was hoarse from the many speeches. He was welcomed with cheers and respect but also curiosity. Who was this tall, bearded man who spoke so eloquently yet was dressed in less than sophisticated clothes?

Lincoln wanted to show people who he really was and build support for his presidency, knowing so many opposed him. As the train zigzagged across the country, he did just that. Many who hadn't supported him changed their minds. Others recognized they were right about Lincoln all along.

Ironically, as Lincoln was making his way to the nation's capital, Jefferson Davis was traveling by train from his Mississippi plantation to Montgomery, Alabama, to begin his presidency of the Confederate States.

Danger was always imminent. The swarming, pushing crowds so close to the president-elect concerned his fellow travelers. A few miles after leaving Springfield, wire fencing was found across the tracks. As the train left Cincinnati, a carpetbag holding a live grenade was discovered and fortunately disengaged before it could cause severe damage. Word that a plot was brewing in Baltimore had been ferreted out and was being monitored.

There were frustrating incidents, too. In Xenia, Ohio, a huge buffet laid out for Lincoln was devoured by the masses of people before the train ever arrived. In Albany, the security team was late, and people climbed all over – even under – the train, keeping Lincoln captive.

Widmer's book is a must-read for its insights about Lincoln and the hundreds of interesting facts. Passages from Homer's The Odyssey start off each chapter, complementing Lincoln's own odyssey to the White House. Arriving in Washington on Feb. 23, Lincoln was on the verge of becoming our 16th president, which occurred nine days later, on March 4, 1861.

Cinda Ackerman Klickna often reviews books and chose this one after listening to the author on a webinar sponsored by the Abraham Lincoln Presidential Museum.