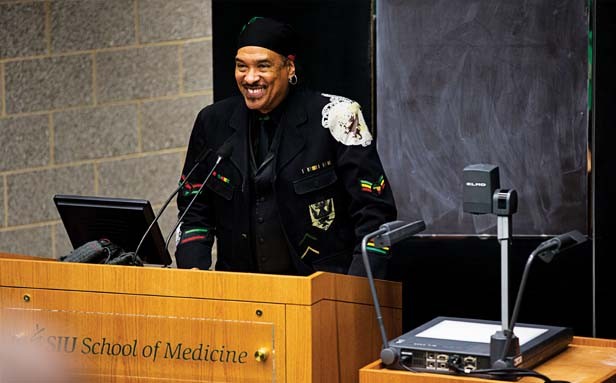 PHOTO COURTESY SIU SCHOOL OF MEDICINE
Kaba Hiawatha Kamene: “Everybody is an African.”

Historians credit Christopher Columbus for finding the Americas, but Kaba Hiawatha Kamene declares that African descendants lived in what is now the United States many years prior to 1492.

Kamene, a staff developer at Harriet Tubman Charter School in the Bronx, New York, who has master’s degrees in art history and in Science of Education Administration and Supervision, presented supportive information for his beliefs during a Black History program at SIU School of Medicine on Feb. 28.

In his presentation, titled “The African Presence in the Mississippi Valley Before 1492,” he challenged his audience to look at the historic Cahokia Mounds through the perspective of ancient African history.

Kamene said that pyramids in the United States, commonly referred to as Indian mounds, along with skeletal remains, show evidence that the Paleo-Americans migrated to this and other countries many thousands of years ago.

When Kamene spoke about pyramids he described them as “quadrilateral masonry masses having smooth, steeply sloping sides” but explained that the burial and ceremonial structures do not have to be pointed or have classic triangular pyramid shapes.

Paleo-Americans were the earliest human inhabitants of North and South America and were descendants from Africa, Kamene said.

“In fact, studies show that they are the original peoples of the Western Hemisphere and that their presence goes back further than the proposed 100,000-year mark of the last migration of anatomically modern humans out of Africa.”

Africans were the first people to live on earth. They migrated all over the globe into Arabia, Iran, Iraq, Afghanistan, Pakistan, India, China, Japanese Islands, Vietnam, throughout all of the far east and beyond, Kamene explained.

Therefore, he believes that the African continent is the seat of civilization for all humanity. He said that African people migrated throughout the world and also settled in the Mississippi Valley region and most specifically in Cahokia, Ill.

“There’s one race, the human race, and it began in Africa; so everybody is an African,” Kamene declared.

Evidence of the Paleo-Americans having migrated from the African continent around 1500 BC exist “because the Spaniards, the French and the British talked about them, describing them as short-statured African-looking people who they recognized as mound builders,” Kamene explained. “And they were believed to be the first mound builders.”

He further stated that most structures referred to as mounds built by ancient Indians really derived from the structure of pyramids, and that pyramids were built by African people.

“History is filled with fallacies,” Kamene said. He implied that either information is omitted from history altogether or altered in some way “to serve white supremacy.”

History excludes most of the accomplishments of people of color, he added. The Pythagorean theorem, for example, was invented by a black man, and the great grandmother of Queen Victoria was a black woman named Charlotte Sofia.

“It is important to know and to understand who we are as a people,” Kamene emphasized.

He told his audience that the human remains found in such places as San Diego, Calif., Ohio, Wisconsin and Illinois have proved the presence of Africans in North America.

By examining and using special instruments to measure specific body parts, especially the skull, scientists are able to better determine the origin of human remains, he explained. The focus, however, must be on the facial structure and specifically the jaw, and not on the color of the skin complexion, which many people tend to look at, Kamene said. The size, position and depth of the jawbone more accurately determine the ethnicity, he explained.

According to Kamene, evidence of the Paleo-American presence has been found at the Cahokia compound, which is a unique site. It is not just one mound but a compound consisting of several mounds including Monks Mound, the largest mound in North America.

Kamene, who serves as the principal facilitator and CEO of an African-centered science academy called Per Ankh (House of Life) suggested two books for more information about his topic: Pyramids in America by R.A. Umar S. Bey and Paleo-American: A Primer on Ancient American History by Neser Em Nehea Ali.

LaVern McNeese of Springfield is a wife, mother and grandmother who likes to inform and improve society through her writing. 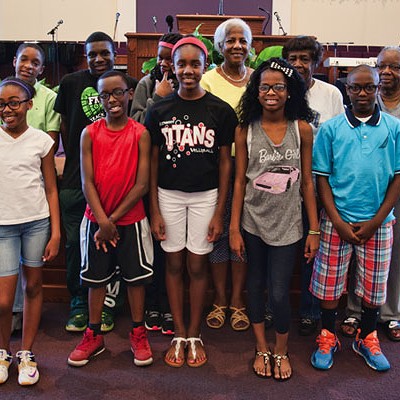 A farm for teaching schoolkids 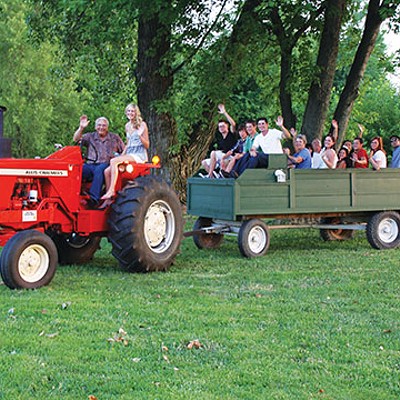 Summer grandparenting. There’s so much to do.