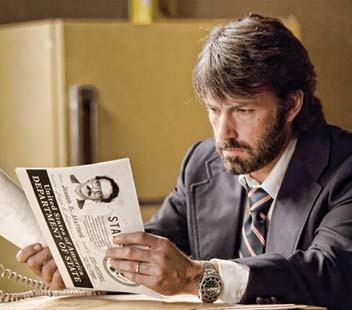 If there’s a recurring theme in the three films Ben Affleck has directed, it’s that he’s fascinated with how characters react when they’re trapped. Gone Baby Gone dealt with the long-term ramifications of an act done in kindness that ultimately results in inescapable and tragic consequences. The Town concerned itself with people trapped by their economic circumstances and the dire acts they resort to in an effort to free themselves. His latest, Argo, is based on a real-life spy caper that recounts the efforts of a lone CIA “exfiltration” expert who devises an outlandish plan to help free six Americans trapped in Iran during the hostage crisis that began in 1979.

Tautly constructed and surprisingly funny at times, this is Affleck’s most accomplished film. He is able to combine disparate tones to great effect while cutting back and forth between two equally intriguing storylines. The result is a wholly entertaining film. It effectively pushes viewers to the edge of their seats while telling its tale with a liberal dose of ironic humor that underscores how ludicrous and miraculous these events were.

Affleck also stars as Tony Mendez, an extraction specialist brought in by his old CIA colleague Jack O’Donnell (Bryan Cranston) once the agency gets word that six workers have escaped from the U.S. Embassy in Iran before it was taken by extremists. The workers have taken refuge in the home of the Canadian Ambassador (Victor Garber) and all involved are stymied as to how to go about rescuing these citizens without creating even more turmoil. Desperate, Mendez concocts a plan in which he will pose as an employee of a Canadian film company who wants to come to Iran to scout locations for a big-budget science fiction epic. To make this venture seem credible, he consults with a veteran makeup artist (John Goodman) and Hollywood producer (Alan Arkin). They help him set up a legitimate production company to produce Argo, a blatant Star Wars rip-off that Mendez hopes will appear authentic enough to fool the Iranian authorities.

Needless to say, Mendez’s plan is met with skepticism, not only by his superiors, but also those he’s trying to help. The screenplay by Chris Terrio does a marvelous job of creating tension on multiple fronts. The infighting among the six being held threatens to reach a fever pitch throughout the film’s second half. In one of the movie’s most effective scenes, when Mendez and his charges are pretending to scout locales at an open bazaar, suspense is raised by the fact that any member of the “crew” may crack and forget their cover story at any time.

Affleck has found his niche with sequences such as this as well as the film’s conclusion that finds Mendez and company trying to get through the Tehran airport to a plane that will take them to freedom. Cutting back and forth between that locale and CIA headquarters, which has dropped the ball in making ticket reservations for the group, the filmmaker expertly and slowly increases the tension without resorting to cheap melodramatics. Affleck creates a sense of realism throughout, not only through the film’s production design but also in the way in which he allows the story to unfold organically.

As good as he is behind the camera, Affleck is the weak link in front of it. He simply does not have the presence needed for Mendez, who should ooze confidence at every turn. Fortunately, he has an eye for casting. Cranston is quite good as a hard-nosed but supportive superior. Goodman and Arkin steal every scene they’re in, each relishing the cynical nature of their characters. Their performances, as well as Affleck’s steady hand behind the camera, help make Argo not only one of the most fascinating films of the year but also one of the most entertaining.