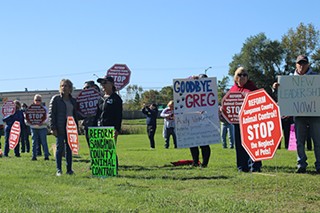 Stacie Lewis
WILD Canine Rescue and PAWS for Life held a protest outside Sangamon County Animal Control on Oct. 16.
As a virus has swept through kennels and allegations of incompetence and wrongdoing have pulsated across the internet and within the halls of local government, at least 17 cats have died that were once housed at the Sangamon County Animal Shelter.

The deaths have sparked talk by Springfield Mayor Jim Langfelder of outsourcing the service the city now pays the county to perform. The municipality is about halfway through a three-year contract with the county.

Both county officials and animal advocates agree that there is a shortage of personnel keeping the kennels clean and of veterinarians keeping the animals healthy. Both situations may have contributed to the outbreak of several diseases within the shelter.

“It used to be that veterinarians would come in and work for two hours, four days a week,” said Dr. Tom Thornburg, a veterinarian who worked periodically at the shelter until he retired about six months ago.

Today, veterinarians work at the shelter between two and four hours total each week.

“This is a real problem – a national problem,” said Andy Van Meter, chairman of the Sangamon County Board. “We do not have enough veterinarians in this community.”

Further aggravating the problem is that several large Springfield-area veterinary practices have been quietly purchased by national conglomerates that prohibit their veterinarians from working at the pound or at other practices, said Jane McBride, a lawyer specializing in animal law and president of Illinois Humane, an animal welfare group.

There are two veterinarians who work at the shelter occasionally: a horse specialist from Rochester and a small animal practitioner from Springfield.

Shelters are particularly vulnerable to outbreaks of disease because the animals live in close proximity and there is a constant influx of strays that may be infected with various diseases, including the cat herpes virus, or feline viral rhinotracheitis.

Once infected, a cat will carry the virus for life. At times of stress, it manifests itself as an upper respiratory disease that also causes inflammation of eye tissues. While feline herpes is seldom fatal, it can leave the animal vulnerable to secondary infections, such as distemper, which often is fatal.

“Airborne diseases are just about impossible to contain in an animal shelter,” Thornburg said. “Ideally, you wouldn’t take in animals that might be sick. But that really isn’t an option for a shelter; their job is to take in strays.”

Several animal welfare groups are lobbying for SCAC executive director Greg Largent to be removed from his position, blaming him for the disease outbreak.

“There is a shortage of people working in the kennels. He ought to be back there helping out,” said Jill Egizii, president of the nonprofit WILD Canine Rescue.

Others contend the facility is filthy.

“Those poor animals out there have to eat and sleep where they poop and pee,” said Mary Coventry of Friends of Sangamon County Animal Control, a volunteer group associated with SCAC.

“People will have these big, crazy rallies. And I hope this isn't some dramatic push. I hope this actually brings change, because we have been working for this for years,” she said.

But county board chairman Van Meter said there is little evidence that the director of the facility is at fault. He noted that he supervises a unionized workforce but few formal grievances have been filed against him. Van Meter noted that hiring entry-level employees, which includes kennel workers, is a struggle for employers throughout Sangamon County.

“Virtually every enterprise in our community is struggling with inadequate staffing levels,” Van Meter said. “Our undermanned animal control staff has worked diligently to provide the service our community rightfully expects. But no organization is perfect. We are sure that our operation can be improved.”

The shortage of veterinarians to work at the shelter is also something out of the director’s control, he added.

“My understanding is he has written to every veterinarian in Sangamon County asking for help, and he hasn’t received much of a response,” Van Meter said. “Most vets are busy in their own practices.”

While the veterinarian shortage is widespread, it is particularly pronounced in communities in downstate Illinois, said Larry Firkins, an associate dean at University of Illinois, College of Veterinary Medicine.

Van Meter added many of Largent’s critics have ulterior motives.

“Some of the people want his job for themselves, while others want to have a big voice in who fills the job,” he said.

WILD Canine Rescue alleged in a news release that animals in the shelter are being improperly euthanized. Animals are typically put down by shelter staff rather than by veterinarians, Thornburg said.

“Oh, sure, if we were there and they asked us to put an animal down, we would,” he said. “But typically, that was done by the staff.” Thornburg said during the years he was a veterinarian at the shelter he never saw evidence of improper techniques being used to euthanize dogs or cats.

The county has requested that the Illinois State Police investigate allegations made against staff and leadership alleging criminal abuse or neglect of animals. On Monday, a veterinarian from the Department of Agriculture conducted a surprise inspection of the shelter and found no violations. Staci Slager, the department’s bureau chief for animal health and welfare, said the facility was previously inspected March 12 and no violations were found at that time either.

Mayor Langfelder said city council members are receiving complaints about conditions at the shelter and that he is open to seeing if any private nonprofit groups in the community would have the capacity and necessary resources to eventually replace the county in providing animal control services.

“First, we would ask: ‘Do you have the capacity to provide the service like the county’s currently doing? And two, can you do it as well or better?’ You have to do it better, otherwise why do it?”

This article has been updated to reflect information about the inspection conducted on Oct. 18.

Scott Reeder is a staff writer for Illinois Times and can be reached at sreeder@illinoistimes.com.