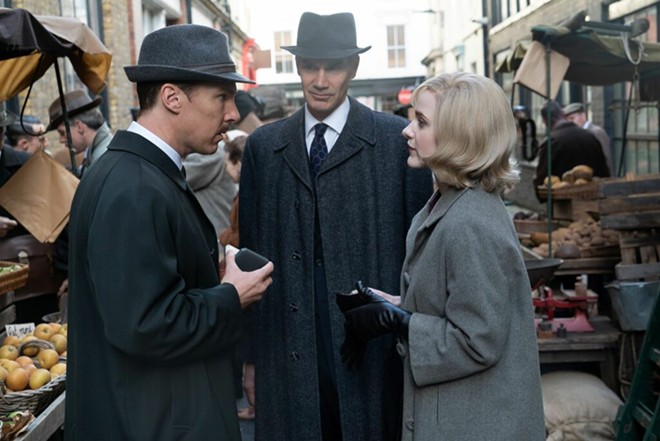 Benedict Cumberbatch in The Courier

Dominic Cooke's The Courier tells the little-known story of Greville Wynne, an English salesman who doubled as a spy for England in the early 1960s. Putting himself in great danger in order to shepherd vital information out of the Soviet Union in an effort to expose the country's activity in Cuba, the corporate peddler soon finds himself in over his head, but invigorated as well. As Wynne, Benedict Cumberbatch is given the opportunity to display his range, going from well-meaning family man, longing to get ahead, to a selfless patriot who comes to realize he has reserves of strength and courage he never knew he possessed. It's a gradual transformation that allows the viewer to see the ever-expanding world of espionage and subterfuge through his eyes, this approach working to great effect. As told by Cooke, this is a fascinating character study that follows Wynne from being something of an innocent patsy to becoming a brave, selfless agent who discovers he has a greater purpose and embraces it. And while this is fascinating, the driving force of the film is the friendship that forms between two unlikely allies, Wynne and his Soviet contact Oleg Penkovsky (Mereb Ninidze), a military intelligence officer. These men come to realize they have far more in common than they thought, coming to recognize they are kindred souls despite their obvious differences. In theaters.

Depp back in good form in City of Lies

Initially set for release in 2018, Brad Furman's City of Lies is being quietly released in theaters in the hopes that Johnny Depp's tattered reputation, as well as continued concerns about COVID-19, won't keep viewers away. It's a shame this fact-based crime movie is getting such an uphill battle because it's not half bad. Depp is disgraced LA police officer Russell Poole, who became obsessed with solving the murder of rappers Notorious B.I.G. and Tupac Shakur, an investigation that leads to his ruin. Uncovering corruption within the department, he meets one roadblock after another, as well as efforts to smear his investigation. Forrest Whitaker is also on hand as an investigative reporter also on the trail and the two screen vets keep us hooked as the story takes its numerous twists and turns. A bit too long, the film nevertheless is an intriguing police procedural that raises many questions about the very institutions we rely on to protect us. In Theaters.

Marriage under the microscope in quirky Happily

BenDavid Grabinski's Happily is a pitch-black comedy that, in a Twilight Zone-like approach, puts the notion of marital bliss under the microscope with, at times, hilarious effect. Tom (Joel McHale) and Janet (Kerry Bishe) are an extremely happy, married couple who annoy their friends because they aren't as miserable as they are. When they and four other domestic duos spend a weekend together, the very institution of marriage comes under fire as secrets are revealed that end up threatening each pair. What Stephen Root's mysterious character Mr. Goodman has to do with all of this, I can't say. However, he winds up being a key player in this engaging dark comedy that takes an incredibly odd and dark turn. As the weekend progresses, the juxtaposition of the happy couple's serenity clashes with the others' cynicism to great effect, delivering big laughs before things get dark...I mean dark. To be sure, this is not a movie for romantics, but Grabinski pulls off an impressive balancing act before delivering a sincere moral regarding acceptance and forgiveness where relationships are concerned. Happiness where your marriage is concerned IS possible — it just takes an awful lot of work and a very short memory. Available through Video on Demand.