A Wolfe, bells and the blues

Sometimes world-class music turns up in town at places we don’t normally associate as live music venues at all, and this Thursday (tonight, for you punctual IT readers) is just that time. Coz’s Pizza, out off of west Wabash, hosts the astonishingly excellent guitarist and supremely soulful vocalist Todd Wolfe for a rocking concert. Wolfe, the electric guitarist in superstar Sheryl Crow’s band for her first five years of phenomenal success (they worked together in New York City during early stages of their careers), recently released a record being hailed as “a music milestone” for the experienced and established singer-songwriter and blues-rocker. This latest album, Miles to Go, is his eighth release and features guest performances by blues harpist Steve Guyger and organist John Ginty.

Through the years Todd’s been associated with the likes of Mick Taylor, Carla Olson, Leslie West, Stevie Nicks, Phish and Faith Hill. Currently on a cross-country tour, Wolfe is joined live by Justine Gardner on bass and backing vocals, plus Roger Voss on drums and backing vocals, to make the classic power trio that is the traveling Todd Wolfe Band.

I hear bells a-ringing and you should too, so follow your ears to St. John’s Lutheran Church on Saturday when Bells in Motion performs at a holiday bazaar to benefit the American Diabetes Association. Along with experiencing the wonderfully played and exquisitely dynamic music from Springfield’s progressive handbell choir, learn about how to understand, prevent and live with diabetes and ways to support community programs already in place to deal with the effects of this ubiquitous disease. Food and shopping goes from 2 to 3 p.m., with the concert, an excerpt from the Bells in Motion program “A Ringing Christmas 2013,” beginning at 3 p.m. Purchase tickets in advance for $20 by calling Jean Welch at 652-7009 or by emailing her at jrwelch53@msn.com. Or get them at the door for $25. Do a good deed and get a great concert all in one place, in one fine fell of a swoop of several bells.

Bar None, holding court at the south end of the Fifth Street Strip, continues its run of Friday night live music shows with a booking of raw and unfiltered blues. Lou Shields, a one-man blues machine, complete with cigar box guitar, harmonica rack and a gritty voice to match the deep longing inherent in true blues, drops in from Chicagoland to bring his vibrant and vital self to town. Shields, a lifelong Chicago resident, as well as a longtime blues performer and fan, also checks in as a working visual artist, dedicated teacher, fervent skateboarder and serious student of the human condition. His artwork covers barns and bluesmen, vamps and femme fatales, apocalyptic visions and other worldly and unworldly pictures from a creative and productive artistic mind. His blues is based on prewar 20th century styles, but kindly transcends the genre with 21st century notions of boundless imagination met with timeless experimentation. Before Shields comes a couple of solo performances by forceful and talented, local blues guys Devin Williams of Auburn and Spencer Stokes from Springfield.

Would all you area performers working hard to entertain the masses, snap a good, clear, high-resolution photo of your lovely selves and send it to calendar@illinoistimes.com so we can put your picture in the Pub Crawl and as a possible Band Spotlight? Thanks and you’re welcome. 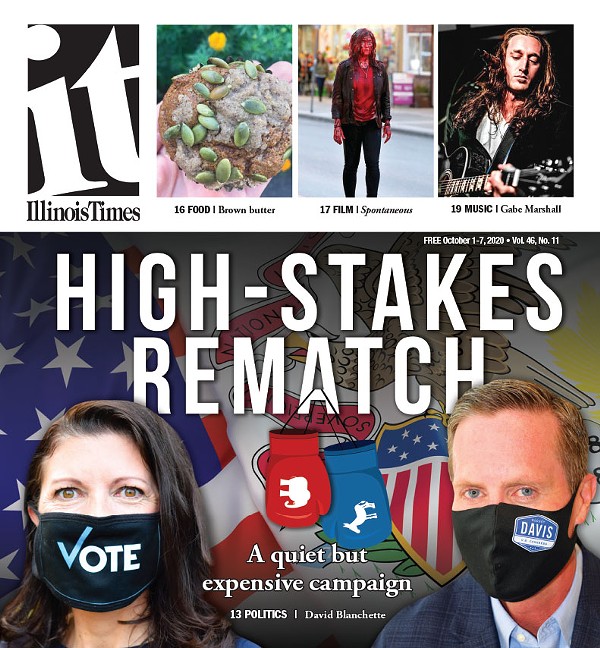